Fresh plans to reform payment practices by law are being drawn up after proposed legislation aimed at protecting the supply chain was condemned to the scrap heap in this week’s state opening of parliament.

Tory MP Peter Aldous’ (pictured) retentions reform bill, which was first introduced in parliament six days before Carillion went under last January, has not been carried over to the new session of parliament.

It would have ensured suppliers’ retentions were protected in ring-fenced deposit schemes, to minimise damage to subcontractors in the event of insolvencies. 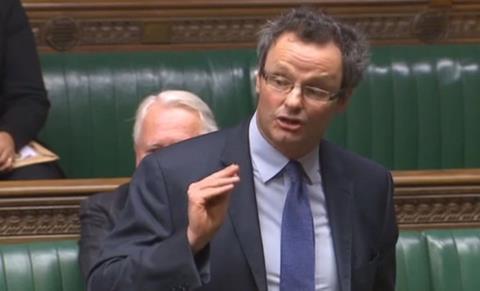 The second reading of the so-called Aldous bill was put back at least half a dozen times with the repeated delays being blamed on the amount of parliamentary time debates on Brexit were eating up.

READ MORE: Government still to respond to retention consultation, 18 months after it closed

Another bill championed by Labour MP Debbie Abrahams, which proposed the mandated use of project bank accounts on public sector projects, was given the green light for a second reading in January this year but failed to be heard again.

Rudi Klein, the chief executive of the Specialist Engineering Contractors’ (SEC) Group, one of the architects of the Aldous bill, told Building that work is already under way on a new private member’s bill which will combine both the Aldous and Abrahams proposals.

He said: “What these bills have done is apply pressure to the government to act but we are still waiting for statutory requirements that will improve payment security.

“For government it’s a bit of an embarrassment to have done nothing of consequence to effect change since Carillion collapsed nearly two years ago.”

Klein said the preferred option was a combined bill because it would be easier to pilot through parliament.

He added the new proposal could include other measures such as the abolition of pay when paid clauses.

Klein said that the SEC Group, which was joined by 90 other trade bodies in backing the Aldous bill, is hoping to get a sponsor MP for the new proposals by Christmas.

A third bill, which had been introduced by Labour MP Andy Slaughter, and would have seen the performance of contractors working on public sector contracts fall under the remit of Freedom of Information requests, also failed to make it into the next parliament.