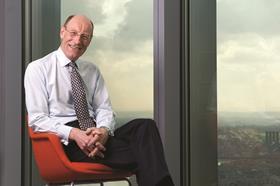 Sir John Armitt has been appointed as the new chair of the National Infrastructure Commission (NIC).

Armitt (pictured), who has been the acting chair since 8 January, was formerly deputy chairman and has been a member of the commission since it was formed in 2015.

He takes over from Lord Adonis, who resigned at the end of 2017, following ongoing tensions with government regarding its handling of Brexit.

Armitt will lead the commission in what is shaping as an important year with the publication of its first-ever National Infrastructure Assessment. This will look at the UK’s long-term infrastructure needs up to 2050.

The Commission’s current work also includes a new freight study and a Roads for the Future competition to find ideas on how the country’s road network can be adapted for driverless cars.

Armitt said: “Making the right choices about planning and investing in infrastructure is critical to the UK’s prosperity and quality of life. I want the commission to remain focused on tackling the long-term issues of congestion, capacity and carbon – and to continue to hold the government to account where decisive action is needed – so we can secure the improvements that companies, communities and families need.

The industry has welcomed the news with Marie-Claude Hemming, director of external affairs at the Civil Engineering Contractors Association Marie-Claude, saying Armitt was well-positioned to take up the position.

“We look forward to working closely with the Commission under Sir John’s leadership, to not only identify the UK’s infrastructure priorities over the long term, but to ensure that our members and the wider supply chain are primed to deliver the world-class projects businesses and communities will rely upon in the coming years.”

“As deputy chairman, Sir John Armitt has already brought great industry experience to the NIC. I am delighted to see him now appointed as the new chairman, providing the continuity and expertise needed to allow the body to set out a long term, strategic assessment of the UK’s infrastructure needs.

“As we look forward to the publication of the National Infrastructure Assessment, the ICE will continue to work together with the NIC not only to secure our long term economic strength but to improve people’s quality of life across the UK. At a time of so much political and economic uncertainty, we need a strong and authoritative NIC now more than ever.”

The 71-year-old spent more than 25 years at John Laing becoming chair of its international and civil engineering divisions. After four years at Union Railways, which was responsible for building the Channel Tunnel Rail Link, he left in 1997 to become chief executive of Costain before leaving to take up the post of Railtrack – later renamed Network Rail – for five years. He left in 2007 to become chairman of the Olympic Delivery Authority.