Exclusive: Government has abandoned any intention of rolling out display energy certificates to private sector buildings 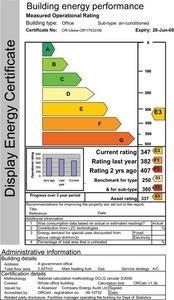 Communities minister Don Foster has confirmed the government has abandoned any intention of rolling out display energy certificates to private sector buildings and will only require the measurement of a building’s design, rather than its performance in use.

The news comes as a report concluded the government should do exactly the opposite to meet its carbon reduction goals.

But in correspondence from building regulations minister Don Foster, seen by Building, the minister makes it clear the government will only require private buildings to display an energy performance certification (EPC), which calculates the performance of a building as designed not actual energy use.

The government had previously been set to roll out display energy certificates (DECs) - which show a building’s actual energy use and are required for larger public sector buildings - to the private sector buildings by October 2012, before the changes were blocked by the chancellor George Osborne in September 2011.

However, the roll-out was given a second lease of life when, in October 2011, the government’s Green Construction Board revealed it would examine their future use.

The construction industry has continued to campaign for DECs adoption as a way of stimulating work, pushing up standards and meeting the UK’s carbon emissions targets.

The news comes as consultant Jones Lang LaSalle and the Better Buildings Partnership published a report that concluded that only by monitoring the measured carbon emissions of buildings could the government and industry succeed in cutting emissions from commercial buildings.

“We have shown that there is little or no correlation between a building’s design (as measured by EPCs) and its actual consumption,” the report said.

John Alker, policy manager at the UK Green Building Council, said the move was a “short-sighted decision, which flies in the face of good sense and a pretty broad industry consensus - and breaks a clear promise made last year.”

Andrew Warren, director of the Association for the Conservation of Energy, said the decision was “perverse”. “I doubt the government can find anybody who supports this,” he said.