The number of public sector contracts up for grabs this year has dropped a quarter on 2019 as covid-19 decimates the amount of work firms can bid for, analysis by Building has revealed.

Contract notices advertised on the Official Journal amounted to 1,330 between January and 10 August last year. 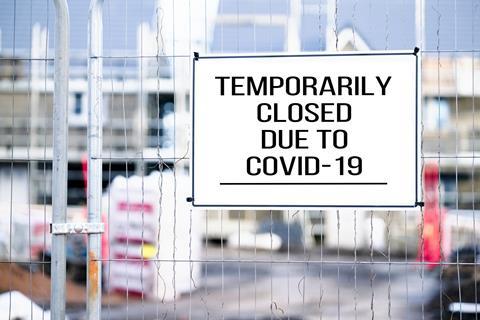 The bulk of the period surveyed this year has coincided with the covid-19 pandemic with workloads already beginning to be affected by the crisis ahead of the lockdown the prime minister ordered on 23 March.

The analysis shows contract awards were down by 19% on the same period last year, while Prior Information Notices (PINs), which set out a client’s purchasing intentions, fell by 6.1%.

At the start of this year, all three types of notices – contract notices, contract awards and PINs – were already lagging behind on the same period in 2019, with the ongoing uncertainty over the UK’s departure from the EU and last December’s general election most likely to blame.

A recovery began in February with contract notices rising 1.8%, awards up 10% and PINs increasing by over 19%.

But in March, the numbers for all three notice types began a steep decline as the covid-19 pandemic tightened its grip on the industry.

There was a slight recovery in June as lockdown measures were eased but from July the numbers began to drop again, with 33.5% fewer contract notices and 39.5% fewer contract awards, with the trend continuing into the first 10 days of August.

The figures highlight fears of thinning order books for construction firms in the wake of the pandemic and underline that new work remains scarce even as activity on existing projects picks up.

The latest CIPS/IHS Markit update, published last week, suggested that despite construction activity speeding ahead at the fastest pace for nearly five years in July, the rebound in order books had been much weaker.

Responding to that survey, Scape chief executive Mark Robinson said the industry must not be complacent about a recovery.

He added: “These latest [CIPS] figures mask the point that the long-term picture will remain unclear until the pre-covid cycle of projects come to completion and we see how many spades go in the ground on new developments.”

Tomorrow, the UK economy will officially be declared to be in recession with figures from the Office for National Statistics set to show GDP fell 21% in the three months to June, the second consecutive quarter of falling growth. GDP declined 2.5% in the first three months of the year.