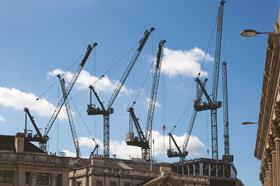 The construction industry turned in its weakest performance since 2009 last month, according to the latest survey of construction buyers.

The Markit/CIPS construction purchasing managers’ index fell to 46.0 in June, its lowest level since June 2009. It had been 51.2 in May. A figure above 50 indicates expansion – below that means contraction.

Tim Moore, senior economist at Markit, said most of the data was collected before last month’s EU referendum.

But he warned that was a bad sign given the result: “The extent and speed of the downturn in the face of political and economic uncertainty is a clear warning flag for the wider post-Brexit economic outlook.”

And he added: “The worry is the ensuing political turmoil will hit construction spending decisions for some time to come.”

Moore predicted that the Bank of England would be forced to intervene at some point later this summer and attempt to stimulate the economy in order to lessen the impact on the economy caused by Brexit.

House building fell at its fastest rate since December 2012 while commercial building work also recorded a limp set of figures, posting one of its weakest readings since early 2010. Civil engineering remained broadly stable during June.

Markit said a number of firms had commented on reluctance among clients to start new contracts in the run-up to the referendum, as well as continuing uncertainty about the general economic outlook.

The boss of contracting authority Scape said he now expected projects to stall until confidence in the economy returned – and said the government must push ahead with planned infrastructure spending.

Chief executive Mark Robinson added: “It is likely that as a result of the Brexit vote, the uncertainty will only deepen in the short term and the brakes will be put on a number of construction projects until confidence in the economy picks up

“Given the nature of the construction industry the true impact of the Brexit decision will only really come to light in a few years’ time – by 2018 we will see the knock on effect on major projects.”

But he said employment numbers for the industry went up last month and added: “[This indicates] companies are optimistic that the current situation is just a blip and in the long run construction activity will pick up once more. I count myself among those that believe there is light at the end of the tunnel and the construction industry will continue on its upward trajectory once the uncertainty clears.”

Brian Berry, chief executive of the FMB, commented: “In the wake of the UK’s vote to leave the EU, there is a growing concern that this period of uncertainty is only just beginning.

“Construction is an industry that is particularly vulnerable to dips in confidence and it appears that many clients were hesitant to commit to new projects as they were unsure of what the future held.  An exit road map is needed to show what steps are going to be taken to withdraw from the EU.”