Aim to approve new reactor every year until 2030

The heavily trailed British Energy Security Strategy, published today, set out plans to generate 24GW of energy from nuclear power by 2050, which would account for around 25% of projected demand.

To achieve this, the government is aiming to approve one new reactor every year until 2030, including on the Wylfa site in Anglesey.

A new government body – Great British Nuclear – is to be set up to bring forward new projects and a £120m Future Nuclear Enabling Fund will be launched later this month.

Tim Cooper, sales director for consultant Arcadis’s energy business, said the strategy was “sensible” in light of recent world events, saying it will provide opportunities to addt “a lot of technically challenging, interesting jobs to help the economy”.

He added that while there would be a need to increase the skilled workforce to meet the government’s nuclear new build targets, a lot of the skills already existed in other infrastructure projects such as HS2. 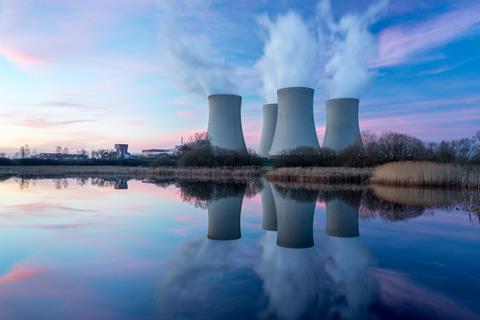 “There will be a need to grow it but not all of it needs to be nuclear – a lot of it fits in a skillset that we can bring from other infrastructure programmes,” he said.

Hinkley Point C – for which a Bouygues and Laing O’Rourke team is carrying out civils work – is the only nuclear power station currently under development in the UK.

Bu the government is currently negotiating with the developer of the Sizewell C project in Suffolk.

Together the two projects would generate roughly 6.5GW of energy.

Peter Sibley, energy sector lead at Hydrock, the engineering firm with specialist nuclear consultancy, said he thought the industry was “ready” for a new build boom, but that it would take a “huge joined up effort” to achieve.

He said ramping up nuclear new build could also create an “exportable workforce” in the UK.

“We are seeing this more and more in the decommissioning market, what’s to say we can’t do that in new build as well,” he said.

It has invested £210m into Rolls Royce’s SMR business, which recently submitted its design for approval by the nuclear regulator – a process which typically takes around four years.

Last Energy, an American SMR company, also has plans for a fleet of reactors in the UK and believe their reactor design – much smaller than Rolls Royce’s – could pass through the regulatory process more quickly and be up and running by 2025.

But Sibley said the first SMRs in the UK would be unlikely to be rolled out until the 2030s.

Plan also include a goal of producing 50GW through offshore wind – enough to power every home in the UK – with planning reforms to cut the four-year approval time by three-quarters.

Communities which wish to host onshore wind infrastructure will be supported in doing so in return for lower energy bills, while in the North Sea there will be a new licensing round for oil and gas projects.

The government is also looking to multiply solar capacity by a factor of five by 2035 and increase hydrogen capacity to up to 10GW by 2030.

The strategy has been criticised by the opposition for its lack of action on improving energy efficiency, with shadow climate change secretary Ed Miliband saying the omission would “force households to pay hundreds of pounds more for their energy bills”.

Sir John Armitt, chair of the National Infrastructure Commission said the government should be credited for the “scale of its ambition” to expand renewables but added that “some of the quickest wins can be found in improving energy efficiency by better insulating our homes and public buildings to cut overall demand”.

He added: “The potential benefits are now bigger than ever, and we again call on government to set out a costed, long-term plan for meeting its own targets and help households make the right choices for their pocket and the planet.”