The value of construction project starts is 21% lower than a year ago, according to Glenigan.

Underlying work commencing on-site during the three months to April was significantly down, seasonally adjusted, on the same period last year, according to the information provider, and fell 1% against the preceding three months.

Glenigan’s May Construction Index paints a gloomy picture, with soaring labour and material costs leading to unease among investors, delaying project starts across the UK.

The amount of residential work starting in the first month of Q2 was 28% down on the previous year, despite experiencing a minor improvement against the previous quarter, up 9%. 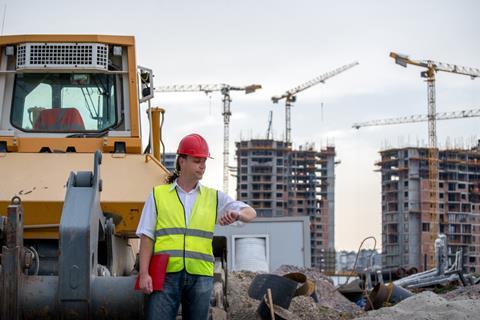 The traditional spring uptick in project starts has not materialised

Office projects experienced the greatest growth, increasing by 50% against the previous three months to stand 19% up on a year ago, but it was the only area to experience growth against both periods.

Hotel and leisure project starts experienced a value increase of 10% against the previous year, suggesting the sector is starting to recover from the pandemic – this despite a 30% decline on the strong burst of activity seen in Q1 of this year.

Retail construction starts were 4% down on the year before, but 13% up on the previous three months, while industrial starts fell on both counts, by 24% and 17%, respectively.

Infrastructure starts continued their steady decline, down 4% compared with the last quarter to stand 27% lower than a year ago.

Civil works were down 28% on last year, driven by poor performance in utilities.

Health, education, community and amenity construction-starts were also down against both the previous quarter and the previous year.

On a regional level, the North-east continued to be the UK’s strongest performing region, with a 44% increase in project-starts value against the previous quarter, 3% up on the same period last year.

Northern Ireland was the only other region to experience growth on the previous three months (+7) and year (34%).

The West Midlands rebounded from poor Q1, growing by nearly a third against the preceding quarter despite a 9% value decrease on the year before.

The East Midlands saw 1% growth on Q1, while in the North-west the value of project starts fell 18% against the previous three months and by a fifth compared with the same time last year.

Work starting on-site in the South West (-41%), Yorkshire & the Humber (-39%) and Scotland (-30%) all remained distinctly behind statistics from the previous year.

Glenigan’s senior economist Rhys Gadsby said the traditional spring uptick had not materialised, with the UK continuing to feel the ramifications of the pandemic and the conflict in Ukraine.

“Despite a general reluctance to move consumer sector projects to site, there is evidence of bounce back in the residential sector, with private housing showing signs of improvement,” he said.

“Although external factors have continued to frustrate the industry, construction has consistently invented creative solutions to its problems, and I am confident that the UK will continue to forge a path through these global crises.”