Disruption has intensified since last autumn

Protestors campaigning against HS2 are now starting to add to the cost of the £100bn scheme and threatening to derail its schedule, the railway has admitted.

It said there had been a "significant increase" in protester action since autumn last year with minutes from a late July board meeting warning: "This is now having a direct effect on cost and schedule." 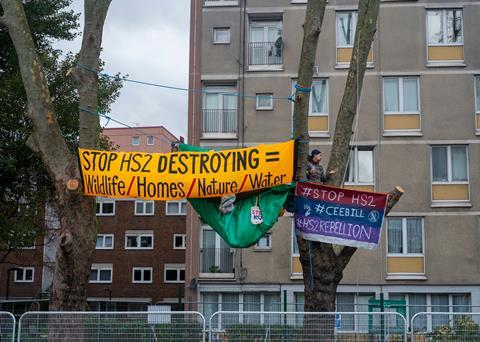 The increase in cost and delays to the schedule were not revealed but papers from a meeting of HS2’s board in May said the disruption to the construction programme caused by environmental protests had left them with a bill so large that they could have paid to build a primary school.

Colne Valley in west London has been a particular target for protesters due to controversial plans to build a 3.4km viaduct through a nature reserve, which is home to wildlife including bats, owls and ospreys.

Campaigners are concerned works required for the viaduct, which include pile driving into an aquifer, will damage the reserve and affect the area’s supply of water to London.

Local authority Hillingdon council has sought a High Court injunction to evict the protesters at Colne Valley, with 29 at risk of losing their assets if found to have breached the injunction.

In July, two protestors were injured after a rope they were hanging from, which had been strung up between two trees to span the Colne river, was severed by HS2 contractors.

Meanwhile, enabling works on Birmingham’s £570m Curzon Street station site had to be paused in August after protesters disguised as construction workers broke into the site and chained themselves to a digger.