Pupils could return to Grenfell school in September

Governors, staff, pupils and experts to be canvassed over a possible return to the building that sits at the foot of the tower block 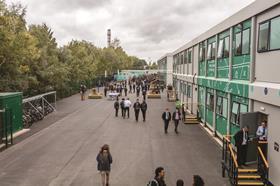 Pupils of Kensington Aldridge Academy, whose original home sits in the shadow of the burned-out Grenfell Tower, could return to the building from temporary premises as early as this September, Building has learned.

Governors, students, staff and what the school called “independent experts” will be canvassed over a potential return from temporary premises built in the wake of last year’s fire.

The school’s management team has indicated it wants to return but pupils will be among those consulted on any move. A final decision is expected next month.

The original school on Silchester Road was based in a state-of-the art £26m home at the foot of Grenfell Tower. The school, which was built by Bouygues and officially opened by the Duchess of Cambridge in 2015, escaped unscathed from last June’s fire.

But the blaze meant around 950 students were forced to moved to the new temporary school, built in only nine weeks, on disused land owned by the Ministry of Defence in the neighbouring borough of Hammersmith.

Mace was appointed along with Portakabin to build the school for the Education & Skills Funding Agency – using more than 200 modular units supplied by Portakabin – which opened to students last October.

A spokesperson for Kensington Aldridge Academy said a final decision had not yet been made on a move back to the original site but she said the school believed it was in the best interests of the students to return.

She said: “We are currently in a period of consultation with students, parents, staff and independent experts on whether we will return for the next academic year. A decision will be made by governors later this term in July.

“If governors cannot be sure students will be safe and their education unaffected then we will not move back, though we firmly believe education would be enhanced if we moved back [to the original site].”

She added: “If the decision was made to return [to Silchester Road] for this academic year, students would begin lessons in the building in September. Any move, whether in September or later, would have to be timed to cause minimum disruption to the school and the education of our pupils.

“We will move back to our permanent building but we are currently exploring whether this should be this year or later. The temporary site we are currently in is purpose-built and available if we need to stay until the tower is fully deconstructed. It was only built last summer so is less than a year old.”

The original building stands next to the 24-storey tower block and its proximity to the tower deemed it unsuitable for use until the forensic teams finished their work and the structure was either wrapped or demolished.

The temporary school covers 7,500m² and features 210 Portakabins. Much of the construction and fit-out work was carried out off-site by Portakabin at sites in Hemel Hempstead, Peterborough and York.