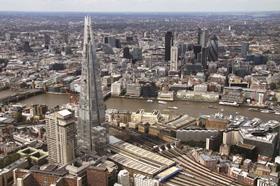 In a statement the six founders said they will focus on construction cost consultancy and their aim is to “be the best”.

The statement emphasised Alinea is “totally independent”. It is fully-funded by the six founding partners, who each have equal shares in the business.

All six founders worked together at Davis Langdon for many years before Taylor and Lacey jumped ship to EC Harris within six months of Davis Langdon being taken over by US-based construction group Aecom.

Alinea is likely to compete with more established rivals, particularly in the London market.

The founders have worked on some of the capital’s most iconic projects – including the Shard and the Leadenhall Building – as well as the early stages of many upcoming major schemes including the Pinnacle, Goldman Sachs’ European headquarters, the Scalpel and Selfridges’ Oxford Street store extension.

The six founders said: “We are in business together to deliver high quality construction cost consultancy, because we believe there is a better way, because we want to be the best and believe that we can be the best.

“Alinea represents a new chapter in our careers and the alignment of people with a shared desire to offer a better service to clients and a strong set of values that will underpin everything that we do.”

The Alinea name is a combination of the words ‘aligned’ and ‘new beginning’, the partners said.