VolkerFitzpatrick is racing to finish paving at a £39m main entrance upgrade at Wembley Stadium ahead of this Sunday’s FA Cup semi-final.

Around 4,000 fans will use the Olympic steps for the first time this weekend. 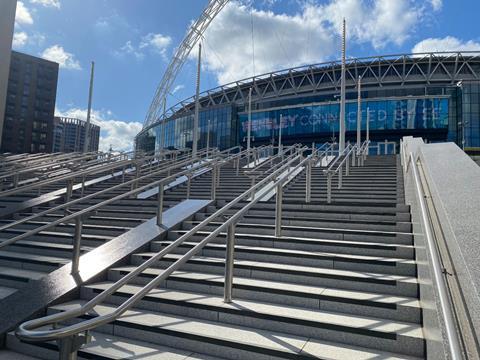 The steps are one of the last projects designed by collapsed architect Dixon Jones, which went into liquidation in September last year

It is first time the stadium will open its doors to the public in more than a year for the 6.30pm showdown between Leicester and Southampton.

But the granite paving for the public realm square at the foot of the steps is still yet to be laid, with scheme’s main contractor VolkerFitzpatrick setting a Saturday lunchtime deadline to get the job finished.

The steps are the latest phase of developer Quintain’s £3bn transformation of Wembley Park, the 85-acre neighbourhood immediately surrounding the stadium.

Despite the tight schedule, the Quintain’s head of master planning and design Julian Tollast said staff working at the stadium were used to working at speed to get the site ready for spectators ahead of match days.

“This is the speed they have to work at,” he said. “We would know that there was a game on Saturday, and on Friday you’d start to see the whole thing getting tidied up and tarmac lorries coming in, almost like somebody was clearing the living room furniture out for a big party.”

He added: “Once all the setting out is done and all the edges are done, the rate that the paving goes down is actually quite impressive.”

The other semi-final match between Chelsea and current frontrunners Manchester City will take place behind closed doors on Saturday.

Another 4,000 fans will be allowed into the stadium to watch the Carabao cup final between Tottenham Hotspur and Manchester City on 25 April, with 21,000 expected to be able to attend the FA Cup final on 15 May.

The original 1970s Pell Frischmann-designed ramps which were demolished to make way for the new steps survived Foster & Partners and Populous’ 2007 overhaul of the site, which was built by Multiplex.

But Brent council, which co-funded the new steps, included a condition in the masterplan for the removal of the ramps after the coach park they were designed to carry visitors over was moved to a new site.

The ramps were also too steep for modern disability standards, prompting the inclusion of four new lifts as part of the steps project to improve access for disabled visitors. 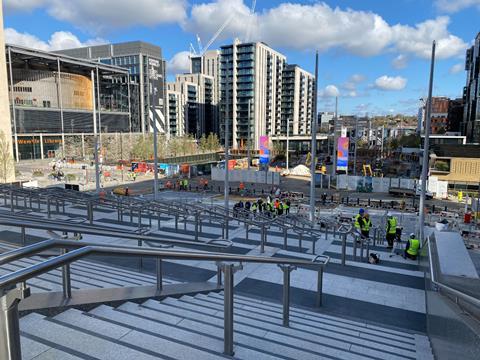 “It’s been a plan 18 years in the making so no sentimentality at all,” he said. “The pedway is a relic from the old stadium and it had no utility outside of stadium days when it was an efficient way of moving people into the stadium.

“What we’ve created here is something for ordinary people to use every single day, for people to sit on and take in the views.”

The project is one of the last designed by architect Dixon Jones, which was wound up in October last year with vPPR taking over the job.