Red Construction has landed a major refurbishment job on a mixed-use scheme in London’s West End.

The Farringdon-based contractor will overhaul a 32,500sq ft office and retail building at 80 New Bond Street most recently occupied by clothing retailer Next.

Due to complete in spring 2023, the job for developer Hines involves partially demolishing the building before rebuilding one wing and adding two storeys. 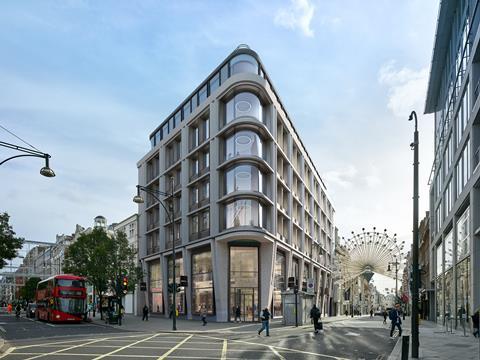 The scheme has been designed by architect Orms

The scheme, which has been designed by Orms and was given the green light in May, will include a complete renovation of the building’s internal steelwork, installation of a new lift core, a new facade and new ground floor columns.

The resulting seven-storey building will provide 31,000sq ft of office space, retail units on the ground and first floors and a large roof terrace.

The 35,500sq ft mixed-use project, which has been designed by Squire and Partners, will be completed by summer next year.