Contractors in the North bullish about growth, despite outcome of recent General Election

In its latest market update, the consultant now expects prices to rise 2.8% in the building sector, an increase of 0.3 % but has lowered its estimate by 0.6%for infrastructure to 3.5%.

Contractors surveyed by T&T during the first quarter of 2017 say they are cautious about upcoming work with order books for the next couple of years down on those of 2016.

But T&T said the national picture hides strong growth in the regions, particularly in Manchester and Birmingham where Andy Burnham, a former health secretary in the Brown government, and ex-John Lewis boss Andy Street were elected mayors of Greater Manchester and the West Midlands respectively back in May.

In the West Midlands, the pipeline of work includes the HS2 railway, developer Argent’s mixed-use Paradise Circus scheme, where Carillion is building an office that will be the new home of accountancy giant PwC, and Ballymore’s £200m Snow Hill office development.

Steady growth in London and the North West is also expected with contractors in both regions predicting an average 4.1% rise in tender prices.

Paul Connolly, managing director for UK cost management at T&T, said: “Birmingham and Manchester in particular are emerging as attractive alternatives to the capital, reporting a stronger market outlook than city regions yet to agree a devolution deal with central government.

“With large volumes of work coming forward in these regions, tender conditions are strong, with contractors experiencing less competition and a general movement towards price growth.”

And T&T said the South West is also being boosted by the pipeline of large infrastructure projects which is starting to ramp up procurement.

But Brexit jitters are hitting the outlook for the North East where only a 1.4% increase in tender prices is anticipated which is in part being blamed on worries over funding as a number of schemes in the area have traditionally been helped out by EU cash.

Projects which have benefitted directly from EU grants include £5.6m handed towards the cost of the £13m Core Science Central building in Newcastle upon Tyne which opened nearly three years ago and was built by Sir Robert McAlpine.

Construction costs are also expected to continue to rise over the next year with contractors anticipating an escalation in prices on imported materials due to the weak pound.

Price hikes are predicted to be highest for materials such as structural steel and sheet metal at 7.1% and 6.5% respectively. Labour costs are also expected to rise but at a lower rate as the firm weaker order books will see capacity returning to the market. 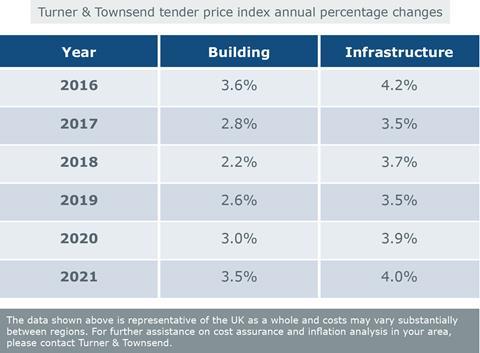