Housing, construction, planning, energy and architecture ministers all expected to be announced today 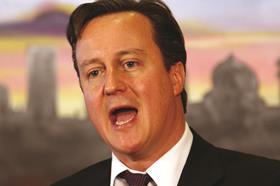 This is a significant one: Mark Francois has been named housing and planning minister, in the communities department, following the appointment of Greg Clark as communities secretary earlier in the day. Francois will also have oversight of the Ebbsfleet development. Francois was armed forces minister prior to the election, and has been MP for Rayleigh and Wickford since 2001. He had a total of three different ministerial posts in the Coalition government - none of which had relevance for construction - but he does have a track record of opposing housing plans in his own consituency. The appointment raises the question of what will happen to incumbent housing minister Brandon Lewis, who is thought to have impressed during his brief tenure as housing minister, and had been tipped by some to take over the Communities Department mantle.

A flurry of further appointments, few of them all that relevant to construction. Perhaps the most relevant is that of Jo Johnson - Tory manifesto writer and brother of Boris Johnson - who is now minister for universities and science at the business department. Edward Timpson is minister for children and families, Nick Boles is skills and equalities minister, Philip Dunne is minister for defence procurement (equipment rather than estates), Alistair Burt is minister of state at department of health, John Hayes is minister of state for security, Penny Mordaunt is armed forces minister, George Eustice has become a minister at the environment department, Andrea Leadsom becomes minister at the energy department, Therese Coffey is deputy leader of the Commons and Ros Altman is pensions minister. Anne Milton becomes the Conservatives’ first female deputy chief whip. Harriett Baldwin becomes City minister at the Treasury.

Matt Hancock has been appointed minister of state at the Cabinet Office, with a remit to “pursue efficiency and Civil Service reform”. He will attend Cabinet. Saving money on public sector construction projects has been a key part of the government’s efficiency agenda.

David Mundell (the Conservatives’ only MP in Scotland) is re-appointed as Scotland secretary.

Greg Hands is chief secretary to the Treasury - a new appointment. He replaces Danny Alexander, another Liberal Democrat casualty last week. This role is all about cutting back spending across government departments. Hands was previously deputy chief whip.

And another - Jeremy Hunt as health secretary. Oliver Letwin, meanwhile, is promoted to a full member of cabinet. He will be in overall charge of the Cabinet Office. Stephen Crabb remains secretary of state for Wales.

A couple of re-appointments - Theresa Villiers as Northern Ireland secretary, Justine Greening as secretary of state at the department for international development.

Greg Clark is the new communities secretary. He replaces Eric Pickles. Another big one for construction - Clark will be responsible for planning policy, including the continued roll out of the National Planning Policy Framework. Along with the housing minister, as yet to be confirmed, Clark will play a key role in enabling (or blocking) steps to address the UK’s housing crisis. He’ll also have the final say on whether or not to grant planning permission to schemes brought in by the planning inspectorate.

Not only a new name, but also a new ministerial role! Anna Soubry is minister of state for small business. She’ll attend cabinet. The Conservatives have always talked a good game when it comes to promoting small businesses, but when its come to getting small construction firms involved in delivering public construction work, their performance has been mixed at best (see procurement of both this and this framework during the last parliament). Labour attempted to make inroads into small businesses’ territory during the election campaign, including with a Help to Build scheme for SME housebuilders. This renewed focus on SMEs from the Conservatives is likely to be warmly-welcomed by construction’s SME trade associations, such as the FMB and NFB.

Liz Truss will remain as secretary of state for the environment, food and rural affairs. This department has a large construction budget as it is behind the UK’s flood defence programme.

Patrick McLoughlin will remain as transport secretary. More continuity that is likely to be welcomed by construction - McLoughlin’s department has been behind ramped up expenditure on roads and rail, as well as, of course, High Speed 2. It’s a particularly key role for this parliament, given the Davies Commission will reccommend solutions to address airport under-capacity in the South-east of England early on, with shortlisted options either to expand Heathrow or Gatwick.

Eric Pickles will be replaced as communities secretary, according to ITV. One to watch out for when Cameron kicks on with the rest of the reshuffle shortly. We’ve picked up rumours that Pickles may become the new Conservative party chairman, replacing Grant Shapps.

Labour has reshuffled its own frontbench team. Chris Leslie is now shadow chancellor, after Ed Balls lost his Yorkshire seat last week. Of interest to construction, Emma Reynolds, formerly shadow housing minister, has been promoted to shadow secretary of state for communities and local government. Hilary Benn has vacated that role to become shadow foreign secretary, replacing Douglas Alexander. No other construction-related roles have changed hands.

A break in the reshuffle now. David Cameron tweets that he’s going to address the 1922 Committee of Conservative MPs - he’ll continue making appointments at lunchtime.

More green love for the new energy secretary Amber Rudd. James Murray, editor of Business Green, tweets that the appointment is “about the very best green economy could have hoped for. Gets climate crisis and green economy.” Sustainability experts had feared a climate change sceptic could be installed in the department, with rumours overnight that Matt Hancock could be made energy secretary.

Confirmation that Sajid Javid is the new business secretary. Javid replaces Lib Dem Vince Cable, also ejected from Parliament by voters last week. Javid will have oversight of industrial policy, including the construction sector, although typically a junior minister at the department for business, innovation and skills (BIS) is formally given the construction minister role.

John Whittingdale has been appointed secretary of state for culture, media and sport. Until recently that would have made Whittingdale minister for architecture, but at the back end of the last parliament the government said it was moving architecture from the ministry of culture to the more high-powered communities department, as exclusively revealed by Building’s sister title BD.

Rudd’s appointment as energy secretary has been well-received by sustainability experts on Twitter. Rudd was previously a junior minister in the department for energy and climate change. John Alker, director of policy and communications at the UK Green Building Council, tweets: “A minister that understands the business case for low carbon and energy efficiency and some welcome continuity”. Journalists are also commenting that Rudd is seen as part of ‘Team George’, as she was private secretary to George Osborne from 2012 to 2013, so should be well-placed to wield influence with the Treasury.

Priti Patel has been appointed minister of state for employment in the department for work and pensions. She will attend cabinet. So Patel is not going to be communities minister, as mooted by various newspapers overnight.

Amber Rudd is the new secretary of state for energy and climate change. She replaces Liberal Democrat Ed Davey, who failed to retain his seat in the Commons last week. This is a big appointment for construction. Rudd will be responsible for the UK’s energy industries, including development plans for the next generation of nuclear power plants and other power-generating infrastructure. She’ll also be responsible for climate change mitigation policies, including home retrofitting schemes the Green Deal and the Energy Company Obligation.

Boris Johnson, back in Parliament as MP for Uxbridge, will attend Cabinet. He’s not been given a ministry, Cameron says “he will devote his attention to his final year as Mayor of London”.

Various journalists on Twitter, including Sky News’ Jon Craig, are reporting that Sajid Javid will become the new business secretary.

After all the talk of hung parliaments, coalitions and all-variety of deals and non-deals over recent weeks, few expected David Cameron to be safely re-installed in Number 10 and announcing his final cabinet posts today. But that is where we are, after the Conservatives secured an unlikely majority victory last week.

Over the weekend Cameron confirmed the first ten posts of his cabinet, with very few changes (see below). But the construction industry will be watching today’s remaining cabinet announcements keenly - the housing, construction, planning, energy and architecture briefs are all yet to be allocated. There are bound to be changes across these ministries, particularly with no Liberal Democrats to seat around the cabinet table this time around. Vince Cable, Liberal Democrat business minister under the coaltion, who had oversight of construction policy, and Ed Davey, Liberal Democrat energy secretary, were among the high profile casualties last Thursday. Overnight, reports have linked Priti Patel with the communities minister post previously held by Eric Pickles, which would give her responsiblity for planning policy.

Keep tabs on this live blog throughout today for all the latest cabinet appointments as they happen, as well as for industry reaction and analysis on what they mean for the construction industry. Hit refresh for all the latest.

The cabinet posts confirmed so far are -

Leader of the House of Lords - Lady Stowell of Beeston (unchanged)