Building Live: Morgan tells delegates ‘design is a critical part of everything we do’ 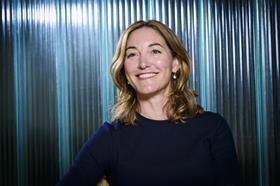 Housing in London will be part of the remit of the National Infrastructure Commission, Sadie Morgan has revealed.

The dRMM co-founder has been asked to lead on the subject by Lord Adonis, who appointed her to the commission last month.

“I will be drilling down into housing needs, how we can help deliver housing in London and how it relates to the infrastructure plan,” she told an audience at the recent Building Live conference in the City.

Housing is considered a fundamental element of infrastructure, not just a by-product of its regenerative powers, said Morgan.

The commission, set up by the chancellor in response to a report by former Olympic Delivery Authority chief John Armitt, has a 30-year outlook. But its first tasks, to be completed before next spring’s budget, are to focus on three issues: northern connectivity; London’s transport system; and energy design.

“I am so passionate about making sure design is a critical part of everything we do. I like to think that’s why they asked me to be on the commission,” Morgan added.

Morgan, who was one of five leading architects delivering their visions of the future at a BD breakout session at Building Live, also spoke about her role leading the HS2 design review panel.

More than 300 people of the “highest calibre” applied to join the 45-strong design panel, with Tom Holbrook, Daisy Froud, Glenn Howells and Hiro Aso among the 45 names appointed.

The opportunities for work on HS2 were “extraordinary”, she said, reeling off the number of bridges and stations the high-speed rail network will require.

Morgan said her task as chair was to convince the authorities they need creative people on board “to tell them what the future looks like”.

“My job is to make sure they deliver on the brief for the largest infrastructure project this country has ever undertaken,” she said. “No one should underestimate the task.”

She added: “It’s so important to remember we have huge design talent here. I am trying to push that right from procurement through design to delivery.

“We are not just talking about designing structures but about management structures that allow that to happen… It will be an extraordinary legacy for this country if we get it right.”