Scheme to include two newbuilds and six refurbs

Sheppard Robson has revealed plans for a series of buildings at a Berkshire science park.

The practice has lodged a detailed planning application for two new buildings and several refurbishments at Silwood Science Park, near Ascot.

The scheme would include a new three-storey life science centre, consisting of a series of offices and laboratories around a central atrium. 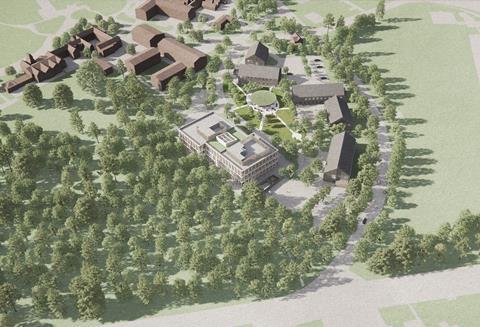 A single storey pavilion cafe would also be built at the heart of the complex. The circular building would be built using cross-laminated timber and a green roof to blend in with the surrounding landscape.

The proposals also include the refurbishment of six two-storey 1980s buildings to provide modern laboratory and work space, with new timber cladding being installed.

Meanwhile, work on a delayed mixed-use scheme designed by Studio Egret West has finally started in nearby Maidenhead.

The six-block, 429-home scheme was first approved for planning three years ago but was held up by funding issues.