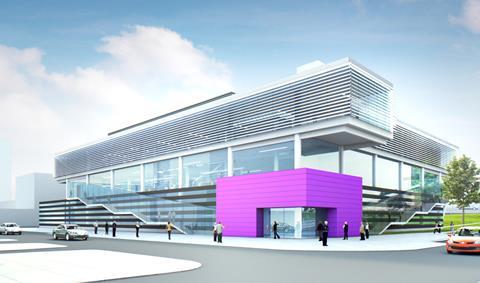 Manchester University is seeking a new contractor for its Rafael Viñoly-designed graphene lab after commercial terms could not be agreed with first-choice Sir Robert McAlpine.

The Engineering Innovation Centre building, earmarked for Sackville Street in Manchester, is designed to complement the already completed National Graphene Institute by offering a base to pilot production of the ground-breaking tough materials and develop their commercial application.

Viñoly was appointed to design the centre early last year, and concept designs (see above and below) were unveiled in the autumn.

But this week the university confirmed it had been unable to agree on a cost for the project with SRM and was now working with another framework partner, Laing O’Rourke.

Steve Jordan, the university’s assistant director of estates and head of its capital projects unit, said the impasse with SRM was “disappointing” but would not affect the firm’s place on the university’s eight-year framework.

“The university are being assisted by one of our other framework partners, Laing O’Rourke, to develop a revised procurement plan for the project,” he said.

“The partnership contractors are assisting us in identifying our next steps to deliver this exciting project”.

The university said it intended to award the contract for the centre’s construction this summer, ahead of a start on site later this year.