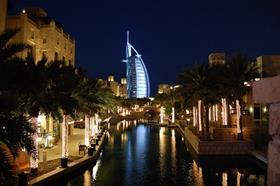 Styles & Wood said that without exceptional finance and interest costs totalling £672,000 incurred over the first six months of 2015, the firm would have made a £209,000 pre-tax profit for the period.

Chief executive Tony Lenehan said the firm had been boosted by the successful completion of a refinancing in June 2015.

Styles & Wood said there was increasing demand for interior refurbishment and fit-out due to “continued restraint in new build development activity” and forecast 4-5% growth per year over the next three to four years.

Styles & Wood said it expected recovery of the refurbishment and fit-out markets to 2008 levels by 2017.

Demand for fit-out and refurbishment was particularly high in the banking, higher education, commercial office and retail sectors. The firm said it had secured new contracts for restaurant fit-outs in the Lowry Centre in Manchester and the Burj Al Arab Hotel (pictured) in Dubai