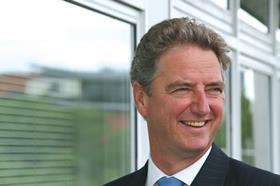 Consultant Sweett Group is diverting investment to its UK division from the Asia Pacific to capitalise on the UK market’s “powerful recovery”, Dean Webster, Sweett chief executive, has said.

Webster said the firm was drawing back resources from its Asia Pacific division - which has doubled in size to £28.6m turnover in three years – to invest in expansion and a recruitment drive in the UK.

Webster said: “We’re restraining growth deliberately in Asia Pacific in order to grow in the UK. Asia Pacific has now got to run off its own working capital.”

Webster was speaking after Sweett posted an increase in overall revenue of 9% to £89.4m in the year to 31 March 2014, in full-year results announced this week.

The consultant posted unchanged operating profit of £2.3m for the year. A £970,000 non-cash gain from exiting a foreign exchange contract hedging Australian dollars boosted its pre-tax profit, which includes finance costs and gains, by 56% to £2.8m, up from £1.8m the previous year.

Sweett said recovery in the UK regions outside London and the South-east had boosted the business, as well as the expansion of its presence in the UK energy and infrastructure sectors, with these divisions growing 145% on the previous year.

Sweett argued its continuing independence in the context of consolidation elsewhere in the UK consultancy market had also helped the firm: “As one of the few remaining players who can offer a truly independent service with global capability, we are in a solid position to benefit from the improvements which we see [in the UK market].”

Sweett said discussions were “ongoing” with the UK’s Serious Fraud Office and the US’ Department of Justice over bribery allegations made in the Wall Street Journal in June 2013 relating to Sweett’s historic operations in the Middle East.

Sweett said “no proceedings have been issued by either of them” and a second independent investigation commissioned by the firm to investigate the claims, by lawyers Mayer Brown, is ongoing.

The firm increased its planned total dividend payment for the year to 1.3p per share, up from 1p the previous year.

Webster added: “The group has performed strongly driven by a powerful recovery in the UK market, where we have gained market share.

“Our order book is at record levels and we are trading well with prospects for turnover and margin improvement being on track.”

The results come after the firm issued two profit warnings and delayed publication of its accounts in 2012.