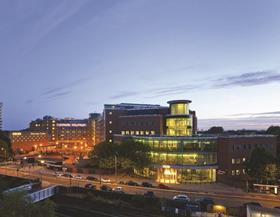 Engineers from Aecom, architect HOK and cost consultant Currie & Brown are part of a team appointed to work up plans for a 120,000ft2 redevelopment scheme at BBC Television Centre.

The prestigious project, known as “Stage Six”, is being overseen by Chris Kane, the head of the BBC’s property department BBC Workplace. It is part of the wider reworking of the Grade II-listed doughnut-shaped building at Wood Lane in West London that is being developed by owner Stanhope, which bought the building for £200m in July. BBC Worldwide, the commercial arm of the BBC, will lease space in the redeveloped building.

Although no budget for the BBC Worldwide job has yet been set, it is understood that a complex plan is being considered involving the “severing” of part of the frontage of the building from the rest of the complex and re-fitting it.

The new space will house 1,400 BBC Worldwide staff with construction due to begin in April next year and complete in 2014, it is understood.

Earlier in the summer, architect AHMM was chosen to work on the wider overhaul of BBC Television Centre. The plans include a creative hub and office, residential and hotel uses.