Thames crossing ‘could be privately funded’ 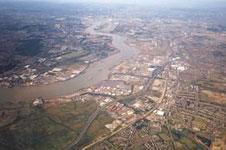 The leader of Kent council has held discussions with Canadian investment firms over plans to build a new Thames crossing without spending public money.

According to the BBC, council leader Paul Carter said the authority had been in discussions with companies in Canada over plans to build the crossing using private funding.

The government is looking at Dartford, the Swanscombe peninsular, and east of Gravesend as three possible sites for a third Thames crossing.

Carter said: “They do a ‘fund design build and operate’ scheme in Canada which has been an enormous success.