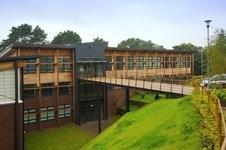 The Orchard, built within a scenic 18ha woodland site in Belfast, has won the RICS Sustainability Award 2008.

The development, situated within Stranmillis University College, is built on previously demolished prefabricated buildings in order to minimise the impact on the existing mature trees surrounding the site.

Numerous sustainable building technologies have been incorporated in the design, including the installation of biomass boilers, resulting in the project achieving a BREEAM rating of “very good”.

To ensure that the building remains as sustainable as possible the building performance will be monitored via the college’s existing software.

Simon Pott, chairman of judges, said: “The work by Stranmillis University College to adopt sustainable principles is truly reflected in The Orchard.

“This is good news for the short-term environmental impact.

“The University’s relationship with the local schools is ensuring that the next generation of children consider the implications of buildings and the environment.

“In addition to the overall category winner, the judges also commended Northumbria University Campus East and The Innovate Green Office in Yorkshire for achievements in sustainability.”

RICS Project of the Year Award

The refurbishment and extension of St Pancras International station as part of an £800m transformation has scooped the RICS Project of the Year Award.

The scheme to refurbish and develop the Grade 1 listed building has revitalised the station and the surrounding areas, with the development becoming a destination in its own right containing high quality retail, catering and consumer services.

Key structural changes, in the form of a new flat roofed train shed, were an essential element of the project in order to accommodate the 400m long Eurostar trains and provide increased capacity for domestic services.

Significantly, RICS thought the project has underpinned widespread regeneration in the area by providing a major impetus for investment. High Speed 1 has provided the certainty needed for planning in the wider area to take place and the retail/catering in the station has acted as a ‘High Street’ for the local area resulting in attractive amenities for inward investment.

The Gateway, a Warrington development which houses voluntary and charitable agencies that provide social, educational, and administrative advice and services for the local community, won the RICS Community Benefit Award 2008.

The Gateway is the largest and most ambitious community resource centre project to date.

At the outset of the scheme, the primary objective was to unite the buildings into an efficiently planned flexible space around existing structural constraints. Out of a very confused multi-level assemblage of existing buildings, the design achieved a simple circulation strategy. The project has ensured that the Gateway is accessible, safe, functional and easy to use.

The project was implemented in two phases; phase one comprised the conversion and alteration work of the establishment centre, with phase two involving the renovation of the conference facility within the main hall.

A retail-led mixed use scheme, St Stephen’s in Hull transformed a semi-derelict 40-acre city centre site that had been in decline for decades.

As part of its range of benefits St Stephens has delivered a £20m public transport interchange which forms a state-of-the-art gateway to Hull.

The interchange has transformed the existing Grade II listed Paragon railway station and bus station into a facility which delivers 24,000 people to St Stephen’s door each day, and most importantly creating 2,500 new jobs.

A Premonstratensian house, Grade I listed Beeleigh Abbey stands outside Maldon in Essex. Established in 1180, the Abbey comprising of church, cloister and outbuildings, was a typical monastic foundation of the period. By the 18th Century, these buildings had been reduced in size with only part of the rectory, outbuildings and a barn remaining – all being used as a farmhouse.

In 2000, a restoration programme was put in place to modernise and provide much needed structural repairs. The first step of the project was an initial assessment of the historical development and building fabrics to ensure that its unique character was not compromised in the course of the works.

The project team carefully endeavoured to limit the loss or erosion of historic fabric, and high quality traditional materials and products such as lime putty were used in the repairs to ensure this was achieved.

The level of detail undertaken is illustrated by the conservation of the trompe l’oeil painted decoration, by the artist Henry Bardon, in a bedroom in the 1624 wing.

The construction ‘Oscars’ were give at a gala event held at The Millennium Mayfair in London on 17 October.

Full details of the winning and commended projects can be found at the RICS site.