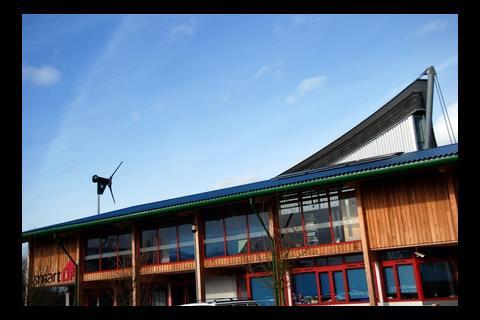 Instead of talking about the industry skills crisis the team behind a new innovative training centre have done something about it. And in nearly two years they have seen 2,500 trained workers in prefabrication and renewables installations enter the industry

Late last month SmartLIFE was honoured as one of the finalists in a European-wide awards ceremony that celebrated projects promoting sustainable development and knowledge-based regional economies. The Cambridgeshire-based project made it through to the final, seeing off the majority of 71 applications from 18 member states.

These plaudits are the latest to be bestowed on SmartLIFE for its work in developing training in modern methods of construction (MMC) in a bid to tackle both the skills crisis and housing shortages within the county. The project centres on a new training facility on the edge of Cambridge, which provides practical training to both young NVQ apprentices and wider industry, through full time and short courses in MMC and mass market renewables (MMR).

Construction trainees in the large workshop learn how to build homes using techniques such as timber frame, steel frame and panelized concrete systems, rather than traditional craft skills. Private companies can also send employees on bespoke courses to learn similar skills, tailored to their construction experience.

The centre is now also embarking on training to suit industry and school leavers in MMR. This sector of the curriculum is being rolled out gradually as the renewable energy types become more popular. Initially, trainees will be able to learn how to install solar hot water and ground and air source heat pumps. Soon the college will include photovoltaics, biomass, and rainwater harvesting in its training schedule.

“We are supplementing the standard NVQs with MMC and MMR to address the needs of the area,” says Barrie Wicklen, associate principal sustainable development. “We are training youngsters to understand that we’re living in an era of climate change and that construction can make a contribution to reducing our impact.

“As an industry, we can’t keep moaning about skills shortages and expecting someone else to do something about it. We have to find different ways of doing things; new ways of tackling the problem. MMC is the way forward in tackling both the housing and skills crisis in this area and the rest of the country. These new methods will enable a new generation of school-leavers to build in a quicker more environmentally responsible way.”

David Arkell, SmartLIFE director and head of innovation and partnerships at Cambridgeshire County Council, explains how the project began: “We identified that a local lack of skills in both traditional and new methods of construction were holding us back from meeting our housing requirements. So, the council, architects, planners and construction firms came together to see what was needed.

We identified that a local lack of skills in both traditional and new methods of construction were holding us back from meeting our housing requirements. So, the council, architects, planners and construction firms came together to see what was needed

David Arkell, SmartLIFE director and head of innovation and partnerships

“We soon realized that we had to intervene in the marketplace to make things happen, to bring people together and that is how SmartLIFE was born. Now that it is performing so well the scheme will benefit the local community by offering students a new training opportunity; by providing skilled labour to the housing sector; and, by providing new housing quicker than was previously manageable.”

The 1500m2 SmartLIFE building sits in the grounds of Cambridge Regional College. Costing £2.5 million, it was designed by Annand and Mustoe and built by Bluestone on a design and build contract. Completed in 2006 and opened the following spring, the naturally ventilated building is itself an exemplar in sustainable construction, featuring a Glulam timber frame, insulation made from recycled newspaper and lambs wool, and a tensile fabric roof. Energy is provided via a wind turbine; hot water comes via solar thermal panels; and a ground source heat pump services the under floor heating and cooling. The building’s performance is closely monitored by students at the college and live readings are posted on the internet (see link below).

The centre is a not-for-profit organisation, which was initially funded from the European Union (Interreg IIIB funding stream) and from the Department for Communities and Local Government’s. Now, it runs as a commercial concern, using conferencing and bespoke training as revenue streams. Local partners in the project include the BRE, Cambridgeshire County Council and the Cambridge Regional College.

European funding was not forthcoming without some unusual and exciting conditions. Arkell sought out and then linked with two similar locally run initiatives in the growing areas of Malmo in Sweden and Hamburg, Germany, as a condition of getting EU money.

Both Malmo and Hamburg are also working towards making a real impact on the construction industry and housing requirements in its own area. Together the three centres make up SmartLIFE and much ‘transnational’ education and experience has come from the alliance. “While we are addressing the skills shortage among construction workers, in Sweden there is a corresponding shortage amongst professionals. And, in Germany, there is a lack of craft-based workers who are experienced in renovation and regeneration projects,” says Arkell. “Therefore, we are training people to be able to build new houses, Malmo is training professional to redevelop its harbour area and Hamburg is training to help with the redevelopment of its inner city. We each have experience an area that the other city required and so can assist with each others’ challenges.”

SmartLIFE is also part of a large scale housing experiment managed by the BRE, in which 106 homes have been built in Cambridgeshire using various MMC. The entire build and now occupancy of the homes has been monitored and results on the best methods of construction will be released by the BRE shortly.

Since opening in May 2006, the UK SmartLIFE centre has sent 2500 new graduates out into industry. This is a big achievement. However, when you consider that Cambridgeshire requires new 10,000 construction workers to meet its target of over 70,000 new homes and £2.2 billion of associated infrastructure in the county by 2016, there is still some way to go.