About 37,000 job losses are predicted across the industry over the next three months with developers expected to make the deepest cuts, the Construction Leadership Council has warned.

Developers expect to reduce their workforce by 16.4% in the three months to July. Materials suppliers are anticipating job losses of 4.8% and contractors expect to cut 2.4% of roles.

The CLC said the developer figures may have been impacted by the comparatively small number of respondents of this type, with developers accounting for 6% of responses.

The government’s furlough scheme starts to wind down from July. The survey, which was run by Build UK on the CLC’s behalf, found that 3% of direct employees are still furloughed, down from 6% last September and 32% in June 2020. 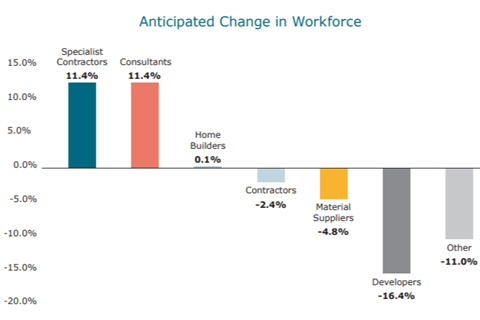 At the other end of the scale, specialist contractors and consultants both expect to expand by 11.4%, meaning that the overall reduction in the number of directly employed workers across the industry is expected to be 1.2% by July.

Official government figures suggest 3.1 million people are employed in the construction industry, so a 1.2% reduction means about 37,200 jobs would go.

Looking further ahead, one in six firms (17%) anticipate making redundancies, with 3% of their workforces being affected.

While not good news, the picture is brighter than six months ago, when 44% of companies were anticipating making redundancies with those job cuts expected to affect 6% of their workforce at the time.

Also on a more positive note, the total number of apprentices employed is expected to increase by 2.7% over the next three months, with materials suppliers looking to increase numbers by 35% and specialist contractors by 24%.

No respondents to the survey, which was carried out in April, anticipate making apprentices redundant.