Museum hoping to move into new home by 2024

Three firms are looking at the main construction package on the new Museum of London site in Farringdon, Building understands.

The high-profile scheme is set to be one of the most fiercely contested in the capital in the coming months with Mace, Lendlease and Bam all believed to be on the shortlist. 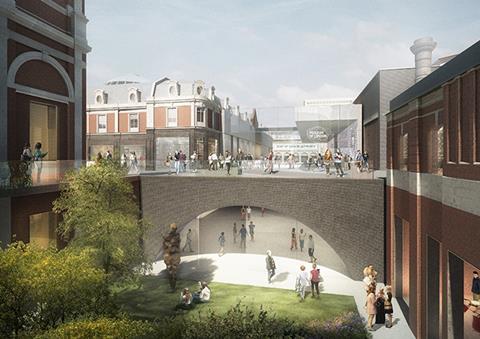 The procurement process for the job, which is believed to be worth around £250m, has been held up by the covid-19 pandemic with tenders now set to be issued later this year.

Tenders for the first major phase of construction work planned at the site have only just been returned with five firms chasing the enabling, demolition and structural work contract at the site in West Smithfield.

Keltbray, McGee and Careys have been joined on the shortlist by smaller rivals Kilnbridge and Harrow firm Toureen.

Under the museum’s original timetable, work on this part of the job had been expected to start this October and run until the following November.

The £337m Museum of London project is being designed by Stanton Williams, Asif Khan and Julian Harrap Architects, while Atelier Bruckner has been chosen to design a large subterranean gallery beneath the new Smithfield building.

The museum’s plans to move into the market buildings at West Smithfield were given the green light by the City of London Corporation in June.

Last week, London firm Paye Stonework and Restoration landed a £9.5m deal to restore the interior of the meat market for the new museum.