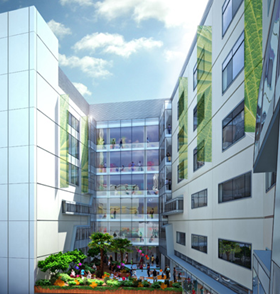 Bam Construction, Brookfield and Skanska are battling it out for the £50m job to build a new cardiac wing at the Great Ormond Street Hospital in London.

The three firms have been invited to bid for the job, with tenders due to be submitted in October.

The project, called New Cardiac Wing Phase 2B, involves the demolition of the existing 7-storey building to level four, followed by the reconstruction of the building to level 8 to ensure that the floor levels align with the rest of the hospital. The job also includes the fit out of the whole building, except the ground floor, including the replacement of all M&E plant.

The new building will accommodate clinical wards at most levels with one floor of operating theatres and recovery areas.

The ground floor of the building will be occupied by radiology and nuclear medicine departments.

When finished it will be renamed The Premier Inn Clinical Building.

According to the official contract notice, the job is worth £50m.

Bam Construction, which built Great Ormond Street Hospital’s Morgan Stanley Clinical Building is an early favourite for the cardiac wing, which is part of the hospital’s wider £320m development programme.

Work is due to start on in May 2014 with completion expected in February 2017.