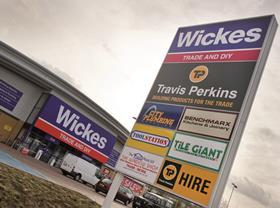 According to a statement to the City this morning the company, which operates under the Travis Perkins, Wickes, Toolstation and Benchmarx brands, has seen like-for-like sales growth of 12.4% in the third quarter of 2014 across the group. The company also reported a total sales growth of 6.9%.

The continued growth comes despite weaker than expected sales in plumbing and heating market.

Travis Perkins stated that government-led incentive schemes pulled forward significant boiler installations in the second half of 2013 and first quarter of 2014.

This, combined with a later start to the plumbing and heating season, has resulted in market volume declines. It expected market conditions in this sector to “remain challenging” for the next six to nine months.

Chief executive John Carter said: “Trading has remained strong for most of our businesses and the group’s continued good performance is underpinned by the successful introduction of a number of self-help initiatives.

“We have outperformed our markets whilst making strategic investments that we are confident will support continued market share gains.”