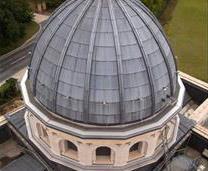 The University of Oxford is planning a £1.8bn development push over ten years to compete with its international rivals, according to its director of estates Paul Goffin.

The development push will include development of a Big Data Institute at its medical sciences campus in Headington and will increase the size of its estate by 28% over the period.

Goffin told a Built Environment Networking event on Thames Valley universities’ investment plans this month that the university has embarked on a ten year capital masterplan this year, running from 2014 to 2024.

It has identified £900m of capital projects for the first half of the period, of which £700m is already funded.

Goffin said the university’s expansion plans are in part a response to the growth of its international rivals and the institution has begun “rigorously comparing our estate with an international peer group, including US institutions such as Harvard, Stanford and Yale”.

The University of Oxford’s estate – which spans 528 years of construction since 1424 – grew 25% over the past ten years.

Two other universities in the Thames Valley – Oxford Brookes and Buckingham New – also discussed their development plans at the event.

Oxford Brookes University said a review of its estate strategy is underway, with the university exploring options to build out masterplans at each of its three campuses, at Harcourt Hill, Headington and Wheatley.