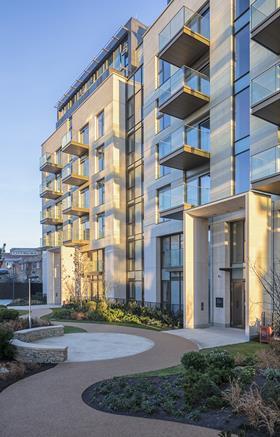 Wates has taken the top spot on the contractors’ tables for August, bagging 19 contracts worth a combined £406m. It signed on the dotted line to build phase two the 808-home Lillie Square scheme – next to the Earls Court Masterplan in central London – for £110m.

The company has also signed up to construct a four-block building housing 633 flats at Quintain’s Wembley Park development in north-west London for £145m and an arts centre for the University of Warwick for £22.5m.

Balfour Beatty is next up on the table including civils having won 27 contracts valued at £331m, including a £110m contract from Network Rail to electrify a 65km section of track between Cardiff and Bristol Parkway as part of the Great Western Mainline upgrade.

Morgan Sindall is in second spot, excluding civils, boosted by a £140m contract from London-based City West Homes for repairs and refurbishments to its housing stock and a £21.1m contract for a sports building for Southampton Solent University.

Higher education has helped Willmott Dixon to fifth in the ranking including civils and third on the table excluding civils. The contractor is to build a new sports and wellness facility for the University of Warwick for £36.2m.

A new entry this month is Barnfield Construction, which won an £80m contract to build the Frontier Business Park in Blackburn, while Bowmer & Kirkland is in tenth place excluding civils, having won five contracts in August worth £60m, including a £42.9m contract to build new student accommodation and an elite athlete centre at Loughborough University.