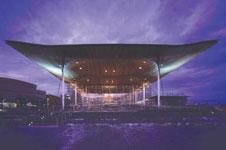 Welsh ministers are taking civil engineering firm Morgan Est to the High Court in a damages claim worth over £6m.

The dispute centres around the failure of rock anchorages, as part of a scheme to improve the A5 London to Holyhead trunk road on a stretch of road in north Wales.

The development demanded a straight new road be cut through a hillside to take out a series of sharp bends. This entailed high-sided cuttings around 30m deep, which were stabilised by rock anchorages.

A High Court writ claims the predecessors of the Warwickshire-based engineering firm, Miller Civil Engineering, had agreed a price of just over £4m for the work in 1994. This included designing and installing rock anchors, made of steel covered with plastic. The project was finished in 1996.

However, six years ago, routine maintenance showed two rock anchorages had corroded, and an investigation found rock anchorage heads and faceplates had deteriorated. The writ claims some had lost all strength or broken, and others could not be checked because of their condition.

Numerous rock anchorages were reportedly carrying loads of more than 130% of their safe working load, and the defects were subsequently caused by Millers' breaches of contract, the writ says.

The Welsh ministers say caps were omitted from anchor heads, leaving grease ports open, and the rock anchorage design both failed to comply with the original specification, and was not produced with reasonable skill and care.

In many cases, tubes had been cut too short, rubber seals had been damaged, some parts were bent out of alignment, or cut too short, and the rock anchorages were unsuitable for their intended purposes. The writ also asserts that construction had not been carried out in a good or workmanlike manner.

The road was closed in May 2006 following a risk assessment. The Welsh minister also decided to regrade the slope on one side, removing the need for rock anchorages, and to reanchor the other side.

The road was reopened in July 2007, and the remedial scheme was finished in October 2007.

Welsh ministers are suing Morgan Est for the cost of the remedial works, staff time, professional fees of engineers and metallurgists, resulting in a total of over £6.6m, plus VAT and interest.