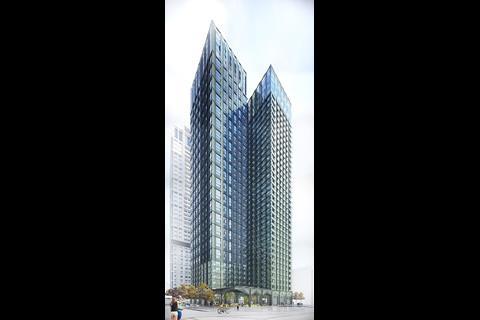 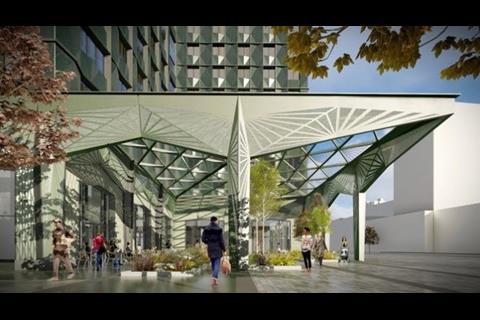 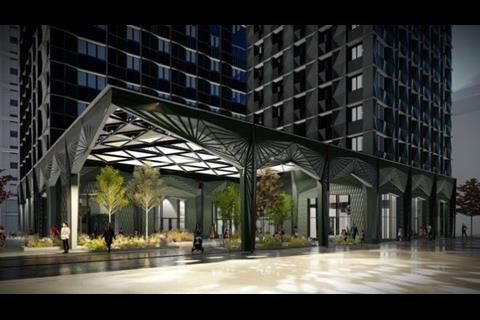 Plans for what would be the world’s tallest modular building have been submitted to Croydon council.

The PRS scheme comprises 546 residential units in two towers, one 44 storeys and the other 38 storeys, with commercial space on the lower two levels.

Architect HTA Design, whose chair Ben Derbyshire is due to take over the RIBA president’s role this week, has filed the planning application on behalf of developer-contractor Tide Construction for the project on George Street in central Croydon, the site of a former British Rail office block.

A spokesman for Tide said the scheme would be the world’s tallest modular building constructed to date, on the basis that other projects making this claim have used in situ construction on lower levels.

The decision to use off-site manufacturing as the construction methodology means the scheme will not require an environmental impact assessment, according to Croydon’s planning department.

“The development is to be constructed to a modular design, with all the modules built in a managed factory environment. These two aspects will ensure that this development minimizes the amount of construction and operational waste in comparison to conventionally constructed developments,” said planning officer Michael Cassidy.

“Pollution and nuisance from the construction of the building will be kept to a minimum by virtue of the modular construction methods to be implemented.”

The Tide spokesman said the contractor expected the consultation on the planning application to start in October.

Croydon had previously given planning permission for a 305-flat development on the George Road site, comprising a 32-storey and a 17-storey tower, in 2014.

The firm usually works with Vision Modular Systems, which it describes as an “associate company”, and “the UK’s largest volumetric manufacturer of structural modules”.

Tide has worked as a main contractor for some clients, including Scape and affordable housing specialist Pocket Living, though it is acting as a developer on the Croydon scheme.

Tide’s CEO, Christy Hayes, has a background in property development in Ireland.