Revealed: The tastes and habits of Britain's average builder 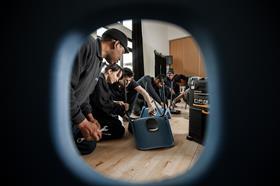 Britain’s average builder earns £26,000, supports Manchester United - and is called Paul, according to a new study aimed at identifying the tastes and habits of tradespeople across the country.

The study of 500 builders by product manufacturer Origin sought to profile the daily lives of Britain’s builders, with results showing they are most likely to have been married for ten years and drive 13,624 miles a year.

The study also found that the builders’ tea now comes with just one sugar rather than two, with the average tradesman sinking six cups a day - with one in seven powering through with 10 hot drinks - while a chocolate digestive proved the biscuit of choice for Britain’s builders.

For lunch, sandwiches as part of a packed lunch is still the overwhelming meal of choice - with chicken and bacon or cheese and pickle the likely fillers - while a chocolate digestive proved the biscuit of choice for Britain’s builders.

They also proved twice as likely to indulge in a healthy pasta or salad as they were to opt for burgers and chips.

The study revealed the average tradesman wakes up by 6.24am and is out of the door by 7.20am on a week day.

The survey also found the average builder earns £26,000, supports Manchester United - and is most likely to be called Paul, followed by Andy or Dave.

It also emerged that over a third of builders disapprove of colleagues wolf-whistling at passers-by - with less than a fifth deeming it acceptable behaviour.

When asked about the most stressful aspects of their working lives builders were most likely to cite the British weather (30%); dealing with unreliable staff (19%); and unreasonable customers (19%); while one in six stated finances as a worry, as they juggle multiple projects, customer demands and deadlines.

Andrew Halsall, managing director at Origin, said: “We all know that no two builders are the same, but wanted to show just how hard they work and the pressure they are under.

‘’The results show just how much of a shift goes into being a tradesman and the amount they have to juggle over long days and many of the findings go against some of the stereotypes.

“On top of the early starts, many are on their feet for over 10 hours a day carrying out physical activity, worrying about finances, employee retention and customer satisfaction, as well as keeping up with the latest building regulations, energy-efficient solutions and sustainable technologies.”

Builders get through their days while listening to Radio 2 – which emerged as the station of choice for Britain’s tradesmen - with clocking off time kicking in by 5.30pm with most builders able to put their feet up by 7.15pm.

Halsall added: “Builders have to deal with a mixture of worries, all of which take their toll. But most go that extra mile to deliver a project that exceeds the customer’s expectations – we should all be championing UK builders.

“Unfortunately there is nothing we can do about the British weather, but suppliers should be helping builders meet their deadlines on time.