While the football on the pitch will be making headlines in Brazil this month, it’s the host nation’s stadium construction that has been highly scrutinised in the build-up. Building reviews the 12 showcase stadiums that have seen groundbreaking design as well as serious set backs during the build, starting with Arena das Dunas 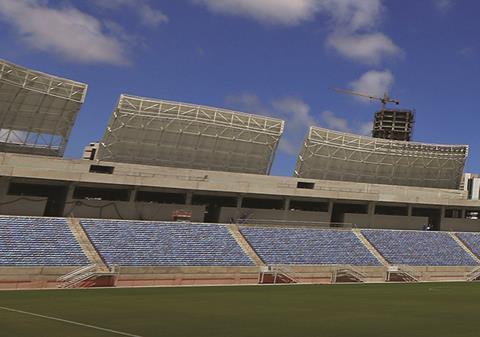 The Olympics may pitch itself as the Greatest Show on Earth but the World Cup is undoubtedly the world’s biggest single sporting event. The International Olympic Committee estimates that between 100 and 200 million people around the world tuned in to watch Usain Bolt retain his second successive 100m title during London 2012, the most-watched event of the Games. Yet FIFA claims that just under a billion people, one-seventh of the world’s population, watched at least part of Spain beating the Netherlands in the 2010 World Cup Final.

The World Cup is not just a big sporting event; it is also a major construction exercise. This is particularly the case in Brazil where preparations for the 2014 World Cup, which begins on Thursday, have been managed in conjunction with those for the Rio 2016 Olympic Games.

Coinciding with Brazil’s emergence as one of the world’s key expanding economies, these twin sporting showcases have unleashed a massive construction and infrastructure programme across the country.

While a World Cup does not typically provide as many architectural opportunities as an Olympic Games, an estimated £2.4bn has still been spent on the construction of the 12 stadiums that will form the World Cup venues, as part of an estimated £7bn wider construction programme. More than half these stadiums are either new or rebuilt, with the remainder extensively renovated. Some of the completed stadiums have already been used for the FIFA 2013 Confederations Cup and others, like the Brasilia National Stadium, will host events at the Rio 2016 Olympics.

The World Cup has not been without its controversy. The combined budget for World Cup stadium construction is three times what was originally quoted when Brazil won its bid in 2007 and some estimates put the amount of people displaced nationally as a result of slum clearance programmes for both the World Cup and the Rio 2016 Olympics as high as 170,000.

Construction has also been hit by a series of delays. All stadiums were supposed to be complete by last December, but only half hit that deadline and some only finished as recently as last month. As a result, a slew of last-minute design changes has been enforced, including the scrapping of a retractable roof and the abandonment of plans to run one stadium entirely on solar power.

Even when the stadiums are complete, at least a third have not been able to secure a long-term tenant and therefore have little chance as yet of achieving post-competition commercial viability.
But worst of all, nine workers have died during construction of the stadiums and their associated developments. The culmination of these difficulties has soured public opinion of the World Cup and led to a spate of protests. In a country where football is worshipped, to turn so many against it is an achievement in itself.

Nonetheless, should all go to plan then regardless of their fraught gestation, the 12 new showpiece stadiums reviewed here should set the stage for a memorable World Cup in a country which some heretically regard as England’s successor as the spiritual home of football.

Speaking of which, the England team is set to play in three of the venues below during the competition’s group stages. Let’s hope our handy guide isn’t the closest they get to seeing the rest. 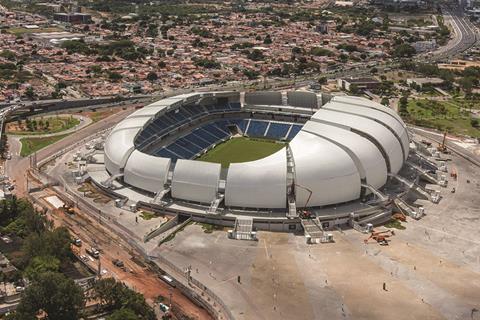 This stunning new arena is the only 2014 World Cup venue designed by stadium veterans Populous, designers of scores of stadiums across the world including the London 2012 Olympic Stadium and several venues in the 2010 South Africa World Cup. It is also unique in having being delivered by a public-private partnership. The stadium’s outer shell is formed by 20 vast aluminium canopies that unfurl around the arena like petals. The canopies are composed of a steel truss structure clad in aluminium tiles; their form derived from the topography of sandy dunes that surrounds the city - hence the stadium’s name. The envelope is completed by polycarbonate infills between the canopies that admit daylight into the stadium.