After nine years, two architects and £1bn, the controversial BBC Broadcasting House refurbishment is winding up. But is it a feat of architectural elegance and practicality, or just another prime-time flop? 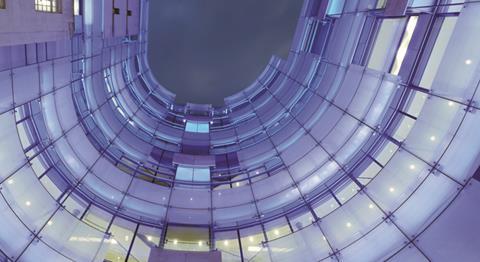 The BBC’s Broadcasting House is now complete. The central London building has taken nine years, two architects, one major mid-project redesign and several bouts of controversy. But although several interiors are still being fitted out, the £1bn structure is essentially ready for the influx of 5,000 BBC staff set to arrive in 2013. The importance of this building to the BBC brand and operations cannot be overstated. The original Broadcasting House, a curved art deco pile at the top of Regent Street, has been the iconic headquarters of the corporation since the thirties. It has hosted broadcasts from luminaries stretching from Winston Churchill to Tony Blair and evokes a legendary, stardust quality that its sober Portland stone facade belies.

Together with two new buildings now added to the original block, the new Broadcasting House complex is the UK’s first purpose-built broadcast centre. It will also enable the BBC to house TV, radio and online operations together for the first time and to group most of its London staff under one roof. This in turn will release several other sites from its considerable London property portfolio for sale or redevelopment. These include equally iconic buildings such as the
soon-to-close Television Broadcasting Centre in White City and Bush House, formerly home of the World Service, in Aldwych.

But the chief architectural interest of Broadcasting House lies in the answer to two particular questions. First, can a building type as technically specialised and operationally introverted as broadcasting studios ever attain the visual drama and exhilaration that we associate with great architecture? And secondly, what impact did the now infamous mid-project replacement of the original architect have on the finished product and the quality of its design?

Both questions pervade every inch of the complex and their answers irresistibly lead to an even more provocative question: whether the £1bn of public money that was spent completing this hulking monolith of a building was worth it.

The redevelopment of Broadcasting House can be neatly split into two phases. Phase one was carried out by the original architect, MacCormac Jamieson Prichard. It survives today in the site masterplan, exterior elevations and elements of the internal layout. MJP was involved in the scheme from its inception in 2002 until 2005. And then, in a process the BBC consistently refers to as “simplification”, but which the less charitable may well recognise as cost-cutting, a root and branch review of the project was undertaken and major changes enforced. An indignant MJP was subsequently replaced with renowned commercial fixer Sheppard Robson. It completed the interiors as MJP exited the scene, sworn to secrecy. 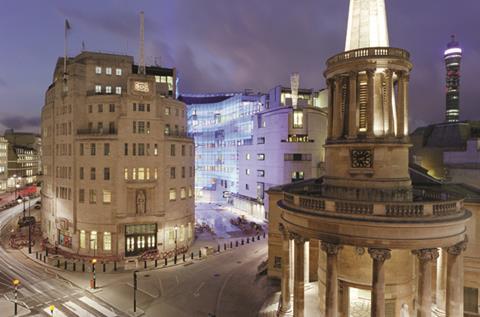 Although Sheppard Robson may be responsible for the completion of Broadcasting House’s interiors, the exterior is all MJP. The masterplan is simple yet effective. In townscape terms, Broadcasting House stands behind one of the most critical points on Regent Street: John Nash’s gracefully delicate All Souls Church. The regency church’s distinctive circular portico and spire act as a pivot that negotiates the subtle shift in axis as Regent Street curves west and merges into Portland Place. They also lie at the end of the long vista from the other end of Regent Street at Nash’s famous Quadrant, three-quarters of a mile away.

Before the redevelopment, Broadcasting House’s contribution to this carefully composed urban view was an incoherent mass of clumsy blocks and rooftop extensions that loomed menacingly behind the slender silhouette of All Souls. These largely post-Second World War additions to the east of the original Broadcasting House have now been removed and replaced with a public space that makes a swooping incision deep into the site. The space culminates in a curved apse that acts as a subtle echo of both All Souls and the semi-circular profile of the front of the original Broadcasting House to the left. A broad, street-level opening in the north-east corner provides access to a side street. This seamlessly embeds the space into the local pedestrian area and ensures that it will become a route as well as a destination.

The full composition is best appreciated from the southern end of Regent Street. From here, the new public space creates a formal glazed backdrop perfectly aligned to the central axis of both Regent Street and the church spire, embracing the latter on either side like a pair of outstretched mechanical wings. The effect is further enhanced at night where distinctive blue lighting illuminates the facades of the public space and cradles the steeple in a protective luminescent glow.

These gestures boldly reinforce the spirit of Nash’s 200 year-old masterplan by rationalising the profile of the buildings behind the church and reinforcing their role as the kinetic centrepiece of a grand urban performance. In so doing, this critical new public space at the heart of Broadcasting House enables the development to make a positive contribution to its local townscape that is both deferential and dramatic. 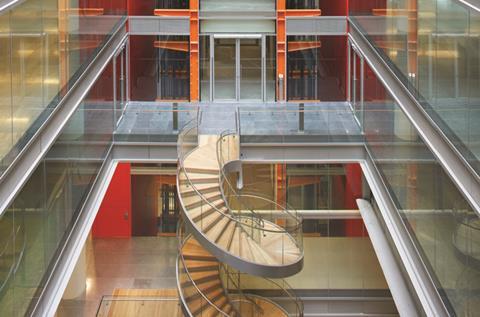 Although constructed during phase two, the elevations remain faithful to MJP’s original designs

The facades are less successful. Although constructed during phase two, they were built to MJP’s phase one designs, thereby avoiding alterations to the planning consent. Throughout much of their work, MJP have developed a trademark elevational typology that features heavily articulated facades composed of multiple extruded layers and components. While the tectonic intricacy of this modular arrangement is enthralling on the practice’s smaller collegiate buildings, such as the senior common room at St John’s College, Oxford, on larger commercial projects - such as Warwick Court in Paternoster Square - it frequently becomes a fussy, cumbersome and obvious attempt to disseminate the scale and mass of a large urban block.

The same is true at Broadcasting House. While the building has an undeniably muscular tone, with deep window reveals and vigorously projecting bays, it appears too fragmented to convince as a single object. It resembles a monster kit of parts rather than a finished whole. The fragmentation increases the impression that a series of cosmetic surfaces has been clumsily overlaid onto an otherwise blank corporate box.

Phase two and the work of Sheppard Robson is primarily revealed in the interiors of Broadcasting House. The BBC maintains that the process of “simplification” was a result of the natural evolution of a project with a decade-long lifespan. As Keith Beal, W1 project director for BBC Workplace, explains: “It was about design development. We asked ourselves if we had asked the best of the design and adapted it to suit conditions we could not have foreseen at the start.”

These adaptations included relocating plant from the basement to the roof, combining two staircases in the main foyer into one and amending the public route through the building. Phase two also displays moments of extraordinary technical ingenuity. A six-storey bridge is “hung” from giant roof trusses linking Broadcasting House and the new Egton Wing. Three basement levels extend to within 3m of the roof of the Victoria line tube tunnel. And five basement “spring-box” TV studios have been designed to float on steel springs to provide acoustic security.

But phase two’s most prominent legacy involved changes to the newsroom: the vast, cathedral-like space that forms the physical and conceptual centrepiece of the entire development. The newsroom is conceived as the engine room; it will eventually be filled with a teeming mass of journalists and reporters and, from 2014, will form the
iconic backdrop to BBC TV news bulletins. It is essentially the architectural face of the BBC, a physical manifestation of its brand image that will be beamed into millions of homes, offices and schools across the world.

The newsroom sits at the beating heart of the building and, on either end, has atriums that extend to the building’s full height with rooflights flooding even its lowest level with daylight. Two swooping staircases are installed at each end, gliding through its lowest four storeys. These, combined with the glazing and the intermittent flourishes of bright walls painted in BBC corporate logo colours, soften the monumental impact of its vast size and concrete and steel finishes. Four giant piers support its central section. 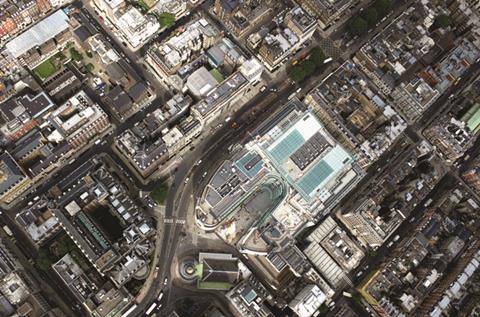 The space is undeniably impressive. Its sheer scale makes a powerful impact and it succeeds in unifying the sprawling building far more effectively than the elevations do.
It also sets the slick - if slightly corporate - visual tone that characterises all the interiors. But it is a very different space to that envisaged in MJP’s phase one designs. Whereas the newsroom as built evokes a sense of simple functionality, its unbuilt predecessor was a spectacular, melodramatic cavern, encrusted with a carved, flowing roof that seemed both futuristic and rooted in the sepulchral spatial sobriety of John Soane.

Beal maintains that this newsroom has more natural light and is more transparent than its phase one counterpart. In keeping with the BBC’s political and social responsibilities, the theme of transparency is constant throughout the development and the newsroom is directly overlooked by a public gallery. Here, the public will be able to see what Beal describes as the “immediacy and impact” of modern news production.

The newsroom acts as a metaphor for what has been accomplished at Broadcasting House. It is a building defined by simple functionality and technical prowess and, as such, satisfies its brief of providing a practical, flexible workplace for the BBC. But, with the exception of its townscape contributions, it is hardly the visionary, inspirational architecture of the kind envisaged in MJP’s original newsroom proposals. In the rush for efficiency, Broadcasting House has become a building that may have lost sight of its soul.

Is this due to the design limitations of the broadcasting studio as a building type? Possibly. Is it a result of the change of architect mid-way through the project? Probably. Is it worth £1bn? Doubtless costs could have been saved along the way. But as Beal points out: “The BBC is the emblematic face of public service broadcasting across the world.” This is the BBC’s perpetual trump card, but it is a legitimate one - of which they should be proud. In an age of ever more aggressive commercialism, securing this cultural legacy for future generations may mean the hefty bill for Broadcasting House is a price we all have to pay.