This week, lunch with the former spin doctor who predicted a Boris bounce, Aberdeen Standard gives a stock response to disappointment and the hardy outdoor swimmers who told Donald Trump where to go

Lunching with a former Tory spin doctor – now a construction PR type – the other day, the conversation inevitably turned to the general election. My dining companion was betting the bank on a Johnson majority of about 50 MPs. Won’t that mean the Blond One would get to run amok, I asked, with relations with the EU being rent asunder? Not a bit of it, came back the PR, since Johnson wanted a decent legacy. “He can bring the party back to the centre and sideline the likes of Jacob Rees-Mogg and Mark Francois.” We shall see.

Fund manager Aberdeen Standard reported a difficult 12 months recently, with returns down by close to 11%. In fact, in his report for the year to September, chairman Richard Burns described it as “a considerable disappointment”. So who is to blame for all of this? “A significant negative contribution from stock selection,” the firm admits. “Largely the result of several serious disasters, such as Kier.” Fitting, I suppose, that Kier is a four-letter word.

Pointers for the president

Donald Trump was in Britain last week for the Nato summit. Not that the US president’s visit impressed the outdoor swimmers on Hampstead Heath as they braved the north London chill. Tony Fretton, the architect behind London’s Lisson Gallery, tweeted: “Proud to say that, as @realDonaldTrump’s helicopter flew over the men’s pond this morning, the whole changing room showed him the finger.” At least they avoided a strafing for their efforts.

I don’t know where Trump was staying – a golf club? – but the question reminds me of a story involving the late Herbert Fitzroy Robinson, the architect who set up the practice now known as Aukett Swanke in the 1950s. Whenever he stayed in a hotel, he would invariably be presented with two rooms – one for Fitzroy and the other for Robinson. But where did Herbert stay, I wonder?

To Stratford for the launch of Mace’s tech business last week and its plans to build high-rise towers more quickly and safely. “The younger, tech-savvy grads love this stuff,” enthused the firm’s boss Shaun Tate. “They’re born with this stuff.” In my day it was Lego and Meccano.

Building’s annual industry quiz produced the usual level of queries from the architects, QSs and contractors who gathered last week at the London Bridge offices of law firm Field Fisher. “Quite handy,” a colleague quipped, “an instant dispute resolution on tap.” The man who sets the questions and acts as co-host, Alinea partner Iain Parker, tells my hack that last year’s quiz produced a number of morning-after emails from irate participants complaining about the veracity of the answers. Hardly surprising, I suppose. This is construction after all.

Own a supercar? Want to flaunt it when it’s not on the road? Then you need the Supercar Capsule, the “creation of every big boy’s dream” designed by Italian consultant ASZarchitetti Group. The firm offers no hint as to the price of what is in effect a bespoke glass-panelled garage. Then again, if you can afford a Ferrari, cost isn’t going to be an issue. 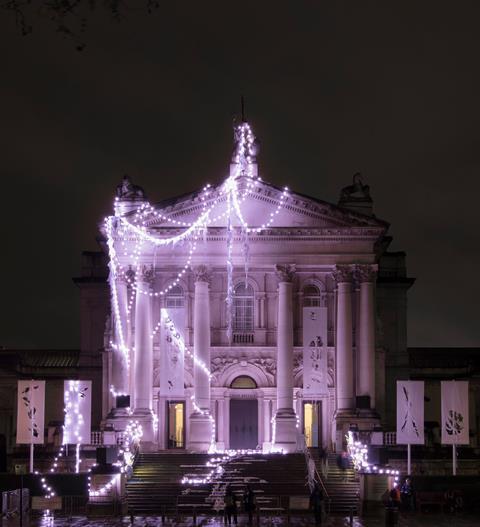 In the chic midwinter

British artist Anne Hardy is behind this rather ghostly transformation of Tate Britain’s entrance in central London. The installation includes “an atmospheric soundscape of rain [and] thunder”. It can only mean one thing: the winter solstice is close at hand.