Construction industry gossip: Thank U, next

As the latest housing secretary – I forget his name – struggles to convince the industry he’ll be around long enough to be taken seriously, his underling, Esther McVey, can’t even get her adjectives in order

I hear the storage space for the nearly 1,800 bikes at 22 Bishopsgate in the City of London has been painted bright blue. “Very Peter Rogers,” says a mole. I always thought Rogers, who is developing the scheme with Sir Stuart Lipton, was a fan of the colour red. I needn’t have worried. The changing area has been painted in his favourite hue.

Catch him if you can …

I’ve had the dubious pleasure of hearing secretary of state for housing, communities and local government Robert Jenrick speak twice in a month. Well, you’ve got to be quick if you want to catch housing secretaries – they move on so fast. Jenrick, the fifth person to hold the role in four years, had the humility to acknowledge this fact in his speech at Policy Exchange, the centre-right think tank based in London, where he outlined his plans for the sector, “if I am given time to do so – and it’s not a given in this office”. He described how he is inspired to noble ambitions as he walks into the housing ministry each morning by the portraits of his predecessors, who include Harold Macmillan, Sir Keith Joseph and Michael Heseltine. I wouldn’t be surprised in the least if an extension is built pretty soon to fit them all in.

For the benefit of serial event-goers such as myself, Jenrick managed not to repeat all his gags from his Stirling prize speech which he made last month. Instead he rolled out one of John Prescott’s best howlers: “The green belt is one of our great post-war achievements – and I intend to build on it.”

Ministerial churn was also a concern on Sir Stuart Lipton’s mind. After listening to Jenrick’s speech last week, the developer said he agreed with every word – but he had a question for the minister: “How do we believe you? How do we believe you are not the annual housing secretary?” Someone in the row behind me grumbled, sotto voce: “Annual would be quite good.”

Jenrick’s underling at the housing department, Esther McVey, has been at it again. Mangling the English language, I mean. In her latest vocabulary faux pas, the minister, speaking at an event in Sheffield last week, said she wanted to see a “housing green revolution”. Now that’s the sort of assault on the standard adjectival order that gives Mrs Hansom the conniptions. Then again, following McVey’s recent call to “literally knock down the barriers to building more homes”, nothing she utters can surprise me any more.

One of my team was in London’s Farringdon recently for a tour of developer HB Reavis’ office scheme, known as Bloom, going up above the Crossrail station. To answer his curiosity about who else was on the tour, several names were rattled off as well as, he was told, “various influencers”. What are they, asked my nonplussed scribe. “Those in the know,” came the reply. For the avoidance of doubt, it’s people with lots of followers on Instagram, my younger team members tell me. Which rules me out.

The launch of a Zaha Hadid Architects skyscraper in Beijing is taking place next month. The invite helpfully suggests attendees fly into the recently built Beijing Daxing International airport … designed by Zaha Hadid. Well I never!

A (nine) grand day out

Persistent HS2 critic, Tory MP Dame Cheryl Gillan, wanted to know how much a recent YouTube video promoting the benefits of the railway cost to make. The information she was after was right at the end of HS2 minister Paul Maynard’s six-line answer: £9,715. 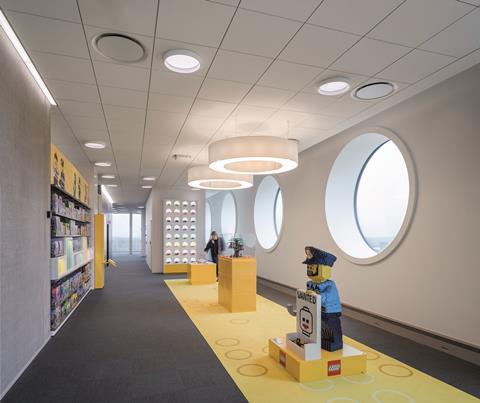 Toy firm Lego has finished the first phase of a new campus at its Danish headquarters in Billund. The building has apparently taken four years to complete, which is about the length of time it would take me to finish the firm’s 7,500-piece Star Wars Millennium Falcon kit.