An Oscar-winner leaves Croydon, shopkeepers are angry as Crossrail eats into their profits and we nominate the railway’s chairman for a Mangled English Award – while a skeleton crew unearth bodies at an HS2 site

One of my colleagues got a guided tour of the newly revamped Fairfield Halls in Croydon recently. Thankfully, acres of asbestos had been removed from the Ashcroft Theatre but I was a little sad to hear that the venue’s famous safety curtain – which features a lovely portrait of the late Dame Peggy Ashcroft, a Croydon local and after whom the theatre was named – had to be dumped on account of its dangerous contents. It was labelled, rather ingloriously for an Oscar winner, ‘industrial waste’.

Dew in the garden

Outgoing Kier finance director Bev Dew is now on gardening leave until next May after presiding over his last set of annual numbers – a £245m pre-tax loss, let’s not forget – last week. One analyst told me at the meeting where they picked over the numbers, that Dew had told him he’d timed his departure all wrong – a reference to the time of the year and the looming dark nights and short days. Not a bit of it. “He told me he was more of a skier than a sunbather,” my mole says.

One of the problem jobs that helped send Kier diving into the red is the Mersey Gateway scheme, a £600m bridge it helped finish two years ago between Widnes and Runcorn. “It’s a fantastic project,” says chief executive Andrew Davies. Kier’s shareholders might not agree. The results show the firm has had to bear £33m of exceptional charges on the project in the past two years.

Scene on the tube

Small shops along the Crossrail route were complaining to the BBC recently that their rents have gone up as a result of the scheme but the project delays have meant they are yet to see an increased footfall which might help them pay their dues. “My business is absolutely at risk,” said one worried owner. At Transport for London’s latest board meeting last week, one member wanted to know from Crossrail chairman, Tony Meggs, whether the organisation was doing anything about it. “Nick Raynsford, the deputy chair, went out to deal with …” Meggs began, before the CSR training took over. “Well, not to deal with, but to actually talk with and interact with those people on the television.”

At least Meggs can clearly explain what is going on at Crossrail. “The cost risks are really the same as the schedule risks,” he told the TfL board. “The primary risk comes from project elongation, if the implementation is delayed.” In plain English that means if it’s late, it’s late and will cost more.

Speaking of rather baffling vernacular, one of my team received an email last week from a PR concerned that a press release he had sent had been missed. “Hope you’re well,” it began. So far, so good. “I wanted to circle back to ensure you saw the below news.” I suppose “circle back” is appropriate given that the email was, essentially, a search and rescue job.

Building columnist Sadie Morgan was bemoaning NDAs – non-disclosure agreements to you and me – at, appropriately enough, an event about gossip, recently. Her roles at the National Infrastructure Commission and HS2 mean, she reveals, that she has now had to sign the Official Secrets Act. “So I can be hung, drawn and quartered,” she deadpans. 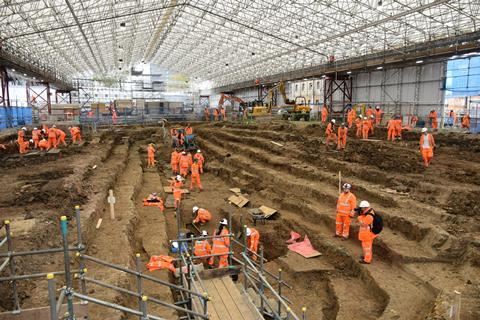 Costain-Skanska is carrying out work at a former graveyard at the proposed site of the HS2 station at Euston as part of its enabling works contract on the project. More than 40,000 people were buried at St James’ Gardens graveyard between 1788 and 1853. It seems unfortunate, then, that one of the joint venture’s values is “Love for life”.