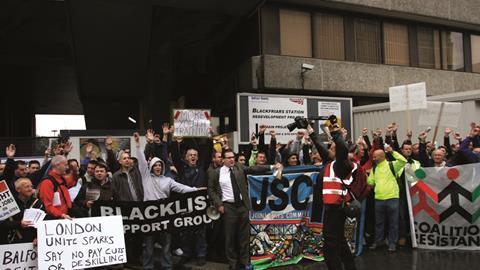 Electrical contractors have ditched a 40-year-old wage agreement, pitching 6,000 workers against their bosses and creating a bitter battle between the industry’s two biggest trade bodies. Can anything be done to stop unrest spreading further? Iain Withers reports

Protests by electricians over eight contractors’ decision to walk out of negotiations over a renewed pay agreement moved to Stratford’s Westfield site this week, following last week’s 100-strong demonstration at Network Rail’s Thameslink site in Blackfriars. A further protest is planned outside the construction site of Europe’s tallest tower - the Shard - next Wednesday. With the UK’s largest M&E contractors, including Balfour Beatty and NG Bailey involved, the dispute has the potential to affect activity on “hundreds” of sites across the country, according to union bosses, who refuse to rule out strike action.

As well as pitching 6,000 workers against contractor bosses, the disagreement over the 40-year-old wage agreement that governs the pay and conditions of electrical contractors’ workers has put two of the construction industry’s largest trade federations at loggerheads. The Electrical Contractors Association (ECA) and the Heating and Ventilating Contractors Association (HVCA) - which between them represent more than 4,000 firms turning over £9bn a year - have fallen out after the HVCA decided to back the eight contractors that walked out of the Joint Industry Board wage agreement talks and help them draw up a replacement agreement. The HVCA’s decision comes after the bodies, which share a Kensington office in London, spent over four years trying to hammer out a new joint pay scheme for their members’ workers, and the terms of a merger of the two organisations.

But what alarms contractors and clients is that the apparent collapse of the wage talks threatens a return to the types of strikes by electricians that beset a number of major projects in the nineties, including the Royal Opera House and the Jubilee line extension.

The eight contractors that have left the Joint Industry Board agreement:

How did we get here?

When talks over the joint pay scheme failed at the start of last year, many of the industry’s largest electrical contractors decided they were in no mood to compromise. After refusing to negotiate with the Joint Industry Board (JIB), which the ECA controls with union Unite, the contractors set about drawing up their own proposals for a replacement scheme and drafted in the HVCA to help them do this.

This tie-up has not gone down well with the fellow trade body that is barely 10 paces down the corridor. The ECA has called on the rebel contractors to come back to the table and work within the JIB. Steve Bratt, chief executive of the ECA, said: “I would urge members who are dissatisfied with the JIB agreement to work with us to find a positive way forward. We are disappointed by this turn of events.”

But the HVCA, speaking on behalf of the breakaway firms, dismisses the scheme as outdated and unworkable. It is proposing the Building Engineering Services national agreement (BESNA), which would break down the distinction between electrical and mechanical workers’ pay and conditions (see box). A spokesperson for the HVCA argues that BESNA will foster a more integrated workforce and provide greater career opportunities for electricians. He said: “These proposals are essential if we’re to move with the times. Institutions have probably been holding this change back.”

These changes, it says, are benign. A spokesperson for the HVCA said: “Not a single worker will be any worse off as a result of these proposals and contractors are making this clear. We want the unions to work with us on this scheme.”

But unions maintain the new contract will be used to drive down pay and conditions in future negotiating rounds. Bernard McAuley, Unite’s national secretary for construction, argues that the BESNA scheme is a direct attack on his members’ pay and conditions, despite admitting that under the proposed scheme no workers’ wage packets will be hit initially: “The contractors are not that stupid - they’re not going to implement cuts immediately. My concern is that future settlements will be worse.”

Key to resolving this dispute is getting the ECA and HVCA talking to each other so employers can present a united front in negotiations with unions. One HVCA source claims the federations’ inability to merge “must have been a factor” in the contractors’ decision to ditch talks. “[Electrical contractors] clearly want a single organisation,” the source added. Unite’s McAuley also believes the federations have to change. He said: “The trade associations should sort out their differences and come back to the union. Our members are not going to be the meat in the sandwich between two inept trade organisations.”

But the disagreement between the two bodies appears to run deep. HVCA sources say the ECA has had opportunities to work more closely with the HVCA but has chosen not to do so. The sources allege that it was the ECA that pulled the plug on talks for a more integrated wage structure as well as attempts to merge the two organisations. In particular it is alleged that the ECA said it could not stomach losing its autonomy in any merger short of taking over the HVCA, which the latter was not prepared to accept.

The ECA has a different take on why merger talks broke down. Bratt says: “Far from wishing to take over HVCA, ECA council rejected a merger proposal and instead opted for a collaborative approach, where both associations would retain sovereignty. Since putting forward this proposal, HVCA have so far declined to engage.” He denies that the ECA has refused to work with them on a combined wage agreement.

Could peace break out?

However, the prospect of a resolution may not be too far away. In a statement to Building, Bratt, who became chief executive of the ECA in October last year after merger talks had broken down, seems ready to resume talks. He said: “On the question of convergence between ECA and HVCA, we agree that this indeed was a ‘missed opportunity’. Again, the door is still open for dialogue and we hope that HVCA will come back to the table.” On the wages disagreement, Bratt said: “We want our industry to be united and firmly believe in a joined-up M&E environment. We are keen to understand the issues and would like to engage with them.”

A senior HVCA source denies that its move to help some of the ECA’s largest contractors draw up a rival scheme was a power grab. “I know people will see this as us driving our tanks on to their lawn but it’s not like that,” he said. “These contractors, our members, came to us and said ‘we want a modernised agreement’ and we responded to that.”

McAuley says he is willing to negotiate with the contractors but describes the BESNA proposals as “unworkable”. “I am not prepared to accept that they’ll tear up the five schemes,” he says, referring to the Joint Industry Board. He refuses to rule out strikes. “I’m not passing comment on that. But we will strenuously defend our members’ pay and conditions.”

The HVCA spokesperson admitted it would be tough to get Unite to drop its commitment to the Joint Industry Board. “They’re wedded to that style and approach. They take the view that employers are up to no good but that is not the case.” The HVCA is sending copies of the BESNA agreement to every worker affected, the spokesperson added.

Contractors for their part are getting increasingly nervous. Stephen Ratcliffe, chief executive of the UK Contractors’ Group, said: “We’ve been contacted by some of our members on this issue and we’re concerned about the prospect of industrial unrest.”

With further contraction in the UK economy looming, the last thing it needs is those sites that are going ahead being disrupted and delayed by industrial action.

For over a century electrical contractors and their workers - represented by the ECA - have been treated as distinct from mechanical contractors and their workers - represented by the HVCA. The largest firms and the HVCA believe this distinction is out of date. The proposed scheme, called the Building Engineering Services (BESNA) grade structure, would break down the distinction between electrical and mechanical workers’ pay and conditions. The BESNA would introduce one pay grade system for electrical workers, instead of the current five wage agreements, that is more comparable with the system used by mechanical and other workers.