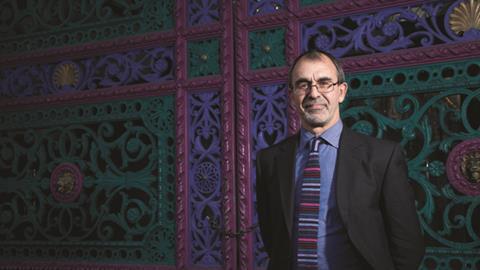 At the heart of Andy Von Bradsky’s business strategy as boss of PRP is a paradox: to survive as an architect, you have to stop just being an architect. It’s time we used all the skills at our disposal, he says

’Bumps along the way,” is how Andy Von Bradsky, chairman of practice PRP, rather politely describes the months ahead for architects. “There is no question that it’s going to be very difficult.” But this doesn’t mean the sector should despair. Despite the staggering unemployment rates - the number of architects seeking jobseeker’s allowance soared by 760% in 2008/09 - and with almost 11% of architectural graduates now unable to find a job in the industry, Von Bradsky says that survival is still achievable. It might, however, mean diversifying further than anyone had expected - out of pure traditional architectural services altogether if necessary.

PRP knows as well as any firm how hard architecture has been hit in the downturn. The group suffered an 18% drop in turnover to £19.5m in its most recent results and was forced to downsize dramatically in 2008, losing 25% of staff in one fell swoop: “That was, without a doubt, the lowest point of my career,” says Von Bradsky, sitting in PRP’s London office in Smithfield market. Since then he has focused on those parts of the business he predicts will get the practice through the difficult times, such as housing, environmental services and overseas work: “In 2010 we took on 50 new people, upskilled and gained a whole range of new skills in planning, design quality and landscaping,” he says. “It has been about making sure we protected growing parts of business and diversified.”

Von Bradsky says that this diversification may need to be stepped up a level if architectural firms want to survive. While many are busily looking at emerging markets and overseas opportunities, that may not be enough. “Gone are the days when design will be the only driver for architects; we need to offer much more now. So we need to rethink, to have a whole series of small activities that are profitable in their own right like branding, designing websites, model making and consultancy work. Architects are incredibly capable as a profession so it’s a case of seeing how they can make the most of the skills they have.”

Of course traditional architecture work is still there to be won. Like many architects Von Bradsky still recognises a healthy future in environmental projects and services and work abroad. But the practice’s split of work will shift away from the public sector as cuts start to take hold: “We are writing a three-year plan now to balance our public/private and international work. We’re looking for a 30%/50%/20% split rather than the 60%/30%/10% split we have now,” says Von Bradsky.

To achieve this, the practice is building up its portfolio of private work, working for developers on specialist housing projects like care homes, a key growth area: “It’s not exactly the sexy end of architecture,” he concedes, “but it contributes something like 20-25% to our business and is pretty central to what we do.”

Then there is the international part of the business. Despite the downturn in Russia, PRP kept its office out there and now has 17 employees winning work in the lead up to the World Cup. To be successful in getting work abroad, says Von Bradsky, you need contacts and connections and to be known already. So PRP is focusing on areas where it already has a presence rather than investing in new locations: “We are playing on our existing skills and contacts and so we are getting stronger in Russia. Ten per cent of our income will come from the Russian office this year because we kept the contacts and momentum up. We have also just completed three projects in China and we have secured our first project in Brazil, the sustainable refurbishment of a school in São Paulo.”

This leads him neatly on to sustainability and the green agenda which, like most other construction firms, PRP sees as a huge growth area: “We have invested heavily in environmental services over the last five years, largely under my leadership. This business is already earning something in the order of £750,000 a year.
“We are founding members of UK Green Building Council and work closely with the energy department on new policies so they are investments in their own right. We are hoping to stay ahead of the game by focusing on retrofit. Architects are often not seen to be a major part of that but I think, through being able to innovate and using the skills we have, we can be an integral part of the Green Deal roll-out. And these are all skills we can take overseas. We are finding there is a real hunger out there for information and the kind of green skills we’ve got in the UK.”

Finally, Von Bradsky is convinced that housing is on its way back: “We are confident that there will be pent-up demand in the UK for housing and that’s going to pop up again. Also, we now have a small team of planners as the Localism Bill has opened up opportunities for us to exploit a miasma of uncertainty. Steering complicated regeneration schemes through local politics and the like has been part of what we do, so in a sense, the Localism Bill plays to our strengths.”

PRP’s strategy shows that making it through the tough times ahead will depend on whether architects are prepared to step out of their comfort zone. Those wanting to thrive will need to be bold, brave and opportunistic. It’s about fast reactions, pouncing on each and every opportunity and accepting that, under hugely difficult circumstances, many firms will not be able to survive on traditional design alone.

PRP: Where the work is