Architectural practice of the year 2013

Some stellar projects helped Allford Hall Monaghan Morris stand out for the judges, but its win also rested on a dramatic set of financial results 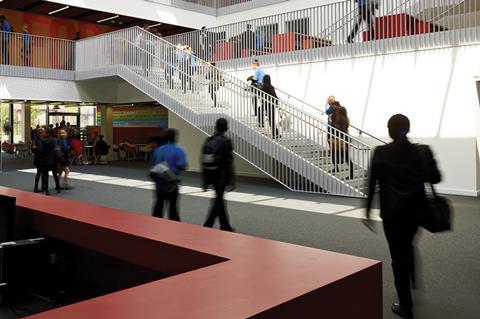 AHMM caught the eyes of the judges not just because of the quality and scale of the practice’s recent commissions, but also because of its financial performance. The firm’s turnover grew by 40% over the last year, with operating profit up 600%. The firm’s headcount also increased by 4% from 144 to 150, while turnover per full-time employee increased by 15%, from £71,000 to £81,000. The judges were also impressed by the range of commissions the firm has won in the last year, from the refurbishment of BBC Television Centre in west London to the first new venue in the Barbican’s 30-year history. In 2012, AHMM also worked on its first project in Oklahoma City - a hospice in north London and a footbridge in the London 2012 Olympic park.

Allies and Morrison has been working on the Olympic park for the last nine years, so 2012 was clearly a big year for the practice. The practice worked on the original masterplan that helped win the Olympics for London back in 2005. It then went on design many of the temporary venues in the park, as well as the main media and press centre and 19 permanent and 14 temporary bridges. In terms of Allies and Morrison’s financial performance, the company has held steady, with an increase in overall income of 3% in the last year and 5% in the last three years. Operating profits were up 2% in the last year, as well as in the last three years.

In 2012, Assael Architecture increased its headcount by 25% to 52 and its income by 45% to £3.4m. In the last three years, turnover has increased by 33% and operating profits have gone up by 36%, while headcount is up 28%. In the last year, Assael also completed the renovation on two historic art deco buildings, returned Wallis House inn Brentford to its former glory and turned Clapham’s dilapidated Lumiere cinema into a community church and apartments.

In the last year, David Morley Architects has won several major projects in the firm’s core markets of healthcare, education and sport, with the latter gaining repeat commissions from the Olympics delivery and legacy bodies, Loughborough University and the Hurlingham Club in west London. The last 12 months also saw the completion of several significant David Morley Architects-designed projects, including the London 2012 water polo arena and the Jubilee Pavilion at Brighton College. The company’s turnover increased by 16% in the last year, while profits grew by 25%. In the last three years, income increased by 48%, while operating profit went up by 38%.

Celebrating its 50th anniversary this year, PRP currently employs more than 300 people in its UK offices. Like many firms, the bulk of PRP’s recent work has been in London and the South-east, with high-profile schemes such as the first residential development on the huge King’s Cross Central regeneration project, Portobello Square in Kensington and Chelsea, and Watling Place in South Kilburn. The practice also worked on the athletes village project in the Olympic park and is currently working on Chobham Manor, the first legacy housing development in the park. PRP’s total income increased by 12% in the last year, while operating profits were up 45%.

Still a relatively small firm with a turnover of around £5m in the last 12 months, Stanton Williams has had a good year. Perhaps most significantly, the firm was awarded the RIBA Stirling prize in 2012 for its Sainsbury Laboratory in Cambridge. 2012 also saw the completion of Stanton Williams’ Eton Manor project in the Olympic park. Work also started on the new public space designed by the practice, to the south of King’s Cross station in London. The firm has also grown significantly from 45 to 65 people, while operating profits were up 4% in the last year. Over the last three years the firm’s income has increased by 2% and its operating profit is up 115%.