Arla’s £150m project will be most environmentally friendly dairy in the world. Thomas Lane reports on progress at this unique industrial building 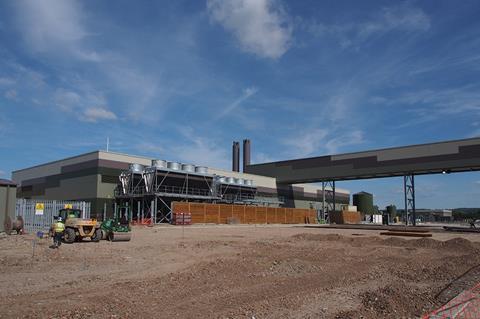 If you live in the south-east of England soon you will be able to buy milk processed by the greenest dairy in the world. Dairy products company Arla is building the world’s largest dairy outside Aylesbury, Buckinghamshire, and has set itself the challenge of making this facility zero carbon. This comes at a time when the industry is grappling with how to successfully create zero-carbon homes and the government has put the zero carbon agenda for non-domestic buildings firmly on the back burner.

As there is no official definition of zero carbon for industrial buildings, Arla created its own. It decided all the power needed for the industrial processes within the plant should be zero carbon. This is a tough call as once operational the £150m facility, which has a floor area of 6.5 hectares, will churn out one billion litres of milk a year, enough for the south-east of England. The process includes pasteurising the milk, making the bottles and packaging it ready for distribution to retailers, an operation which consumes in excess of 8MW of power when the plant is operating flat out.

The company is making good progress at it reckons the plant will be 70% more efficient than a state of the art modern dairy and it is over half way towards the zero carbon target. How has Arla got this far?

Going through the process

The first step was to make milk processing as efficient as possible. Milk arrives in tankers, is pasteurised and put into plastic bottles, which are made on site, ready for delivery to the supermarket. Bill Dickson, Arla’s project manager for this job, explains that the process has been optimised to minimise energy. This includes ensuring the vast, refrigerated milk storage area faces north to minimise solar gain, with the building insulated to better than Passivhaus standards. “From the start we have minimised our energy demand as this is the most cost effective,” Dickson says. 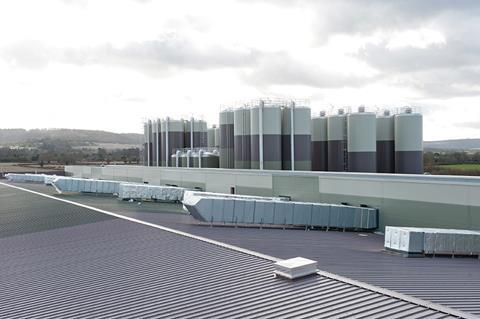 Energy use was minimised by optimising the whole milk process. Milk is delivered by tanker and pumped into silos and is gravity fed to the factory

Each process has been located as close as possible to neighbouring processes to minimise pipework runs, motors are inverter controlled and the number of gears have been reduced to save energy. Processes have also been sited next to those working at similar temperatures to avoid the need to make big changes to process water temperatures.

Tim Evans, Arla’s senior director for supply chain development, explains that one of the biggest challenges was getting the specialist process equipment suppliers to work closely together as this was critical for the success of this strategy. “Normally we deal with each sub-element separately,” he says. “Here we have got a well running machine rather than individual elements that don’t work so well together.”

The steam, hot water and electricity for the process needed to be produced as efficiently as possible. “Typically we have built plant and run these ourselves or contracted out the operation afterwards,” says Dickson, explaining that operators baulk at tough performance targets if they aren’t responsible for the M&E installation. Arla decided to let this job as a design, build and operate contract as it believed this was the best way to drive efficiency into the process. “You get a better quality installation as the guys who install it know they will be looking after it for 15 years and you can incorporate stiff penalties for underperformance,” explains Dickson.

The contract to supply the power and process water went to M&E specialist NG Bailey, which says the contract did influence its approach. “Because we are doing the operation and maintenance we have a vested interest in the efficiency of the plant,” explains Adrian Woodhead, NG Bailey’s senior project manager. He adds that more expensive equipment was selected where the operational efficiencies outweighed the extra cost. 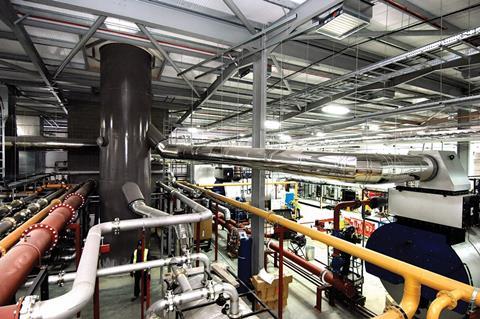 Typically one litre of water is needed to process a litre of milk. This has been reduced by a combination of efficient water use, rainwater harvesting and water reclamation. Here, milk-contaminated water is being turned into useful energy via an aerobic digestion plant which can handle up to 500,000 litres of waste a day. The dairy waste is broken down by bacteria into solid waste and biogas. This has the added benefit of saving on waste disposal costs. The nutrient-rich solid waste can be spread straight onto farmland, which helps with Arla’s goal of making this a zero waste to landfill facility. Waste too dilute for anaerobic digestion is cleaned using a reverse osmosis process with the bulk of this water reused in the milk production process. 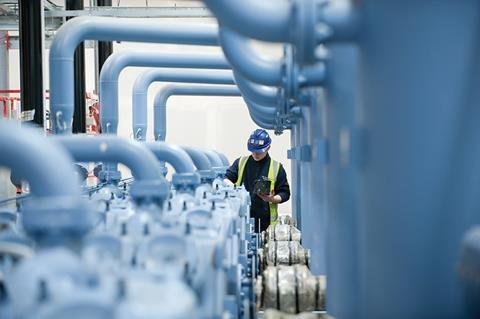 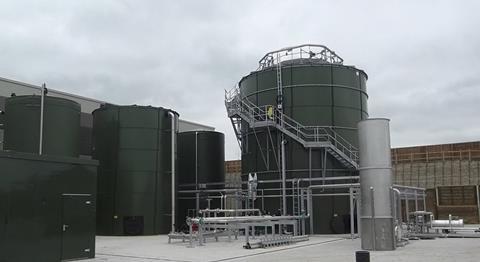 Eleven per cent of the gas used to power the energy centre is derived from this anaerobic digestion plant. It also reduces waste disposal costs

Combined heat and power is a key element of the zero carbon strategy. The energy centre produces 4MW of electricity, which is used to partially power the factory and 4.2MW of heat. Eleven per cent of the gas needed for the CHP engines comes from anaerobic digestion with the balance supplied by the gas network. The heat from the CHP engine is used in the factory to minimise the carbon emissions of the process. The heat is supplied to the factory at 950C via a plate heat exchanger. Arla stipulates this heat must be kept within +/-0.50C of this temperature so the water temperature is trimmed near the process to keep it within tolerance.

Hot water is also supplied to the steam generators to minimise the amount of energy needed to create steam. The building services are also optimised for efficiency and utilise free cooling and heating used where possible.

The plant has a large cooling load supplied by ammonia chillers. Trigeneration (heat, cooling and power) was ruled out on the grounds that most of the waste heat generated by the CHP system could be used in the factory.

Arla now has to find a way of mitigating the carbon emissions of the gas used in the CHP plant and the additional electricity supplied by the grid. The company says it wants to use on-site solutions where possible. One option is to cover the vast roof with PV panels but Evans says this isn’t the answer. “PVs don’t deliver much electricity when you are running an energy-intensive process,” he explains. Another option is to build a CHP plant to supply heat and power to the business park being created next to the dairy. Also, the ammonia chillers produce 6MW-8MW of waste heat, which could be used locally.

If these options don’t meet the zero carbon target, Arla will look further afield for solutions. It doesn’t want to take the easy way out by buying electricity from a green supplier but would be prepared to invest in off-site renewable energy providing this was built specifically for Arla with an ongoing, direct contractual relationship with the supplier. The milk in your shopping trolley may not be zero carbon yet but this plant is a step in the right direction.

How the plant was built

The contract to build the plant went to regional contractor Caddick Construction. It had worked for Arla on smaller jobs but this plant was a lot for a small firm to take on. The preconstruction contract went to Laing O’Rourke and the main contract looked as if it would go the same way but Caddick won the job on the grounds of its relationship with Arla and experience of delivering food and drink facilities.

It had just 75 weeks to deliver the plant. The main challenges were the scale of the job and the need to work closely and flexibly with the suppliers installing the process equipment. The plant has achieved BREEAM “excellent”, which is unusual for an industrial facility. Ground preparation was a big part of this job as the ground had a slope of 3m from one side of the site to the other. The clay on the higher side was cut and laid on the lower side. Lime stabilisation was used increase the bearing strength of the clay, reducing the need for imported fill. Then 435,000 tonnes of topsoil and clay were moved to prepare the site. This work included creating banks varying in height from 3m-9m around the 4km site perimeter to minimise the impact of the factory on neighbours. About 65,000 tonnes of concrete were needed for the floor slabs and 13 hectares of external yards.

The factory is steel framed and includes a separate energy centre and offices. 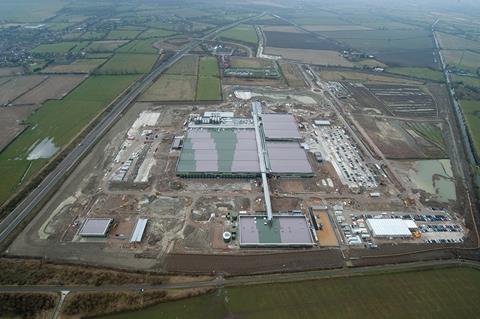 The Arla factory has a floor area of 6.5 hectares. The energy centre (at the base of the picture) supplies power and hot water to the diary via a link bridge

How the milk is processed

Milk arrives by tanker and is pumped into large silos each capable of holding 300 tonnes of milk. The milk is delivered to the pasteurising area by gravity, which saves energy. Here the milk is heated to 72 0C-75 0C to destroy harmful microorganisms and extend the shelf life of the milk. The plastic bottles are blow moulded in a dedicated area from plastic pellets and delivered to the filling hall. The bottles are automatically filled with the labels and tops put on then placed onto the trolleys used to deliver them to supermarkets. These are taken into the 9,000m2 refrigeration area to cool the milk. All milk handling is automated in this area because of the low temperatures. Delivery lorries back up to dock levellers and cold air is blasted inside the trailer to cool it down, then the milk is loaded ready for delivery.