Since 2001 the V&A museum has been carrying out a comprehensive programme of restoration and redesign known as FuturePlan. Contemporary designers are creating new galleries and visitor facilities while restoring and revealing the beauty of the original building. In the past 20 years, over 85% of the museum’s public space has been transformed, improving access and allowing the collections to be more elegantly and intelligently displayed.

It has been a big 12 months for the V&A, with work progressing on a number of major projects. Quinn London began work on the £13m transformation of the V&A Museum of Childhood by architects De Matos Ryan and AOC, with the museum in Bethnal Green to rename itself Young V&A. Work also continued on the V&A’s two new venues in the Queen Elizabeth Olympic Park at Stratford – V&A East Museum on the waterfront (pictured), by architect O’Donnell + Tuomey, and V&A East Storehouse, where Diller Scofidio + Renfro is leading the design. Work also continues on the Photography Centre extension, due to open in 2023. 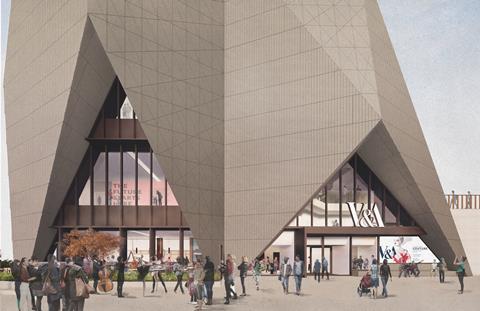 It has been a tough period for commercial developers in the office market, but that has not stopped Landsec pushing forward. The firm launched its final stage of public consultation on proposals for the O2 Centre site in Finchley Road, Camden, ahead of lodging a planning application at the end of the year, and pushed ahead with its plans for Red Lion Court on London’s Southbank. Myo, Landsec’s flexible office brand, also launched its second location at Dashwood near London’s Liverpool Street station and the new Crossrail entrance.

The firm picked Laing O’Rourke for a £195m scheme that will see a 1950s printworks in Southwark transformed into new offices. The Timber Square development will retain 90% of the existing building and use a hybrid steel frame and CLT timber structure, which Landsec says will reduce embodied carbon, construction traffic, demolition waste and local air pollution. Low carbon and recycled materials will be used across the development. Meanwhile the developer is aiming for its 139,000ft2 The Forge scheme in Southwark to be the UK’s first net zero carbon commercial building.

In a year that saw charitable foundation the Wellcome Trust complete its £506m takeover of developer Urban&Civic, the latter has had a bumper 12 months. It was appointed by Hertfordshire county council as master developer on the proposed 3,300-home urban expansion of the town of Baldock, while at Alconbury Weald its plans for turning a former RAF base in Cambridgeshire into 5,000 homes were implemented.

The firm also pushed forward on the Waterbeach Barracks new town development, appointing a delivery partner for the first phase of a scheme that will one day include 6,500 homes, along with 16,000m2 of shops and 15,000m2 of commercial space.

The developer has focused on using modern methods of construction, picking TopHat to build 38 modular homes as part of the first phase of a 1,200-acre scheme in Houlton, Warwickshire. The homes – the developer’s first built using modular offsite construction – were manufactured in single-storey modules at TopHat’s Derby factory before being transported to site.

The east London borough has massive regeneration plans afoot, spending half a billion over the next few years. It has an overarching target to build 27,000 homes and create 52,000m2 of employment space by 2035, and is budgeting to spend £524m by 2025 on this ambition, with 80% of this five-year plan complete by 2023. The money will be allocated to new homes,

The 2035 target will be achieved by partnering with private developers and housebuilders, with some homes built by the council’s own Sixty Bricks. Waltham Forest’s policy is that half the homes on council-owned land should be affordable, with 60% of those being for social rent and 40% for intermediate rent. For homes on private land, the council has a target of 35% affordable where possible. Live projects include Coronation Square in Leyton, Big Creative Education’s Clifton Avenue campus and Chingford Mount town centre.