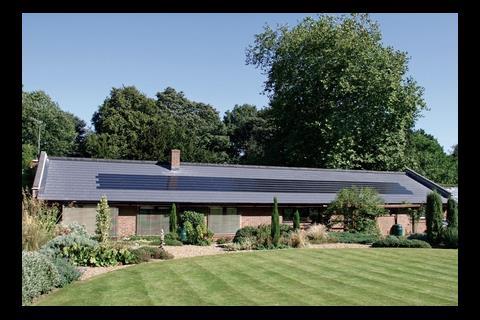 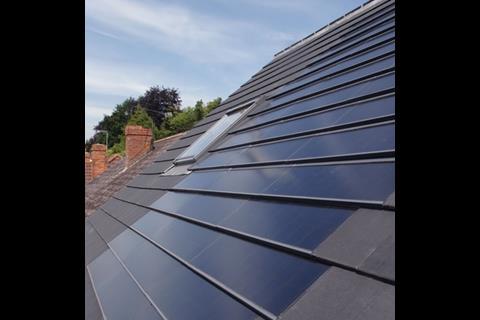 A closer look at the tiles 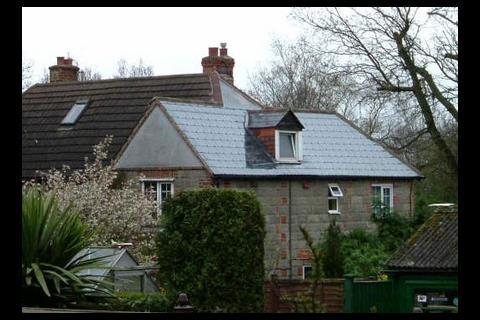 He eventually got permission, but hiding the bulky kit bolted on to the roof can be tricky. Are there any unobtrusive alternatives for buildings with pitched roofs?

The solution could lie with products that look like roof slates. Two companies – Nu-Lok and Solarcentury – have launched “slates” that double up as solar thermal or photovoltaic (PV) panels. Both companies’ products can be mixed with concrete slates in whatever proportion is required. But how easy are the panels to fit and retrofit? And do their electrical or thermal yields make them worthwhile?

“We wanted a fully integrated system to replace solar thermal contraptions that are bolted on to roofs,” says Glen Addy, managing director of Nu-Loks’ UK business.

To this end, his company bought the rights to a solar thermal hot water system patented by a company called Solex. Nu-Lok then advanced the “slate” concept so that it could be marketed and incorporated into its roofs. “We developed a cost-effective, aesthetic solution,” says Addy. “The leading edge of each panel looks like slate,” he adds, and this is the bit that’s most prominent from street level. The appearance of the main glass surface complements neighbouring slates. In a typical 80m2 roof, about 8m2 of solar thermal panelling might be used, providing 65% of a house’s hot water requirements on average.

Nu-Lok supplies PV panels, too. These can stand alone or be incorporated into roofs that also contain solar thermal slates. “We had the first fully integrated system on the market for both PV and solar thermal,” says Addy. Typically, about 10m2 of roof area is needed to generate 1kWp (kilowatt peak), which would provide about a third of a house’s electricity.

The leading edge of each panel looks like slate – and this is the bit that’s most prominent from street level. The main glass surface complements neighbouring slates

Nu-Lok’s interlocking roof tile system makes it easy to lay and retrofit the solar slates. Using a lightweight galvanized steel grid rather than traditional wooden battens, the interlocking slates are clipped into position. The roof also incorporates a drainage system that reduces the amount by which slates overlap. As a result, Nu-Lok says, these roofs use half the average number of slates.

The solar panels are clipped in alongside compatible 400 × 400mm Nu-Lok slates. Plumbing-in the solar thermal slates and wiring the photovoltaic slates are also uncomplicated processes.

But – and it is a big but – Nu-Lok’s solar panels can only be incorporated into Nu-Lok roofs. Retrofitting individual panels is easy, but only on buildings that already have the company’s own roofs. The only way round this is to redo the whole roof.

Solarcentury, in contrast, has designed its solar thermal and PV slates as standalone products, independent of any particular roofing system.

Solarcentury’s slates can be sized according to whichever manufacturer’s standard slate is specified. And it can work at most batten spacings.

Solarcentury has the edge on design flexibility, whereas Nu-Lok takes the plaudits for ease of construction

“The design is generic enough to work across the board – we have no particular allegiance,” says Martyn Berry, a development engineer at Solarcentury.

Like Nu-Lok’s system, Solarcentury’s C21t slate and C21e slate can be incorporated into roofs with any number of standard slates. The products share a standard glass-reinforced frame, which is sized according to need. This takes up a small amount of space but the active area of the exposed slate is as efficient as standard panels. And, as Solarcentury says, they also look like normal slates.

Easing the specifier’s task further, Solarcentury also offers to calculate carbon offsetting for its clients, which helps to determine how many slates are needed.

The company’s target market is still new build rather than refurbishment, however. “We can retrofit,” says Berry, “but we’d have to check batten spacing because closing the gap of battens risks covering up too much of the active part of the tile.”

Alex Michaelis, the architect of David Cameron’s eco-home, confirms that planning permission is needed for bolt-on applications on listed buildings and for some pitched roof applications. But he adds that for roofs no steeper than 30º, if bolt-on panels are set at the same pitch and are not too far proud of the roof’s profile, planning can be bypassed.

“I’m very impressed by these products and can see the advantages if pitch were an issue,” he says, “but we’d either have to rebuild roofs or use them in new builds.”

For those new builds, then, it seems Solarcentury has the edge on design flexibility while Nu-Lok takes the plaudits for ease of construction. But as retrofitting (for anything other than on Nu-Lok roofs) is so problematic, many specifiers might still plump for the easy, ugly bolt-on option if they can get away with it – as they did for Blair.