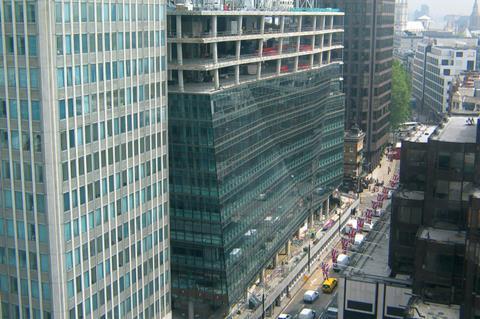 An £80m commercial development in central London has pushed the capabilities of post-tensioned concrete floor slab technology to its limit. 62 Buckingham Gate is a new 12-storey office block nearing completion in Westminster. Designed for Land Securities by Pelli Clarke Pelli Architects, of Petronas and Canary Wharf towers fame, it replaces a banal sixties stone-clad office building with 23,500m2 of offices above 1,500m2 of street-level shops and restaurants.

In technical terms, the development is significant for its use of clear-span floor slabs of 16m at a maximum depth of 365mm. In order to achieve this impressive result, structural engineer Pell Frischmann developed a unique post-tensioned floor slab system that used a combination of ribs and flat slabs to maximise efficiency.

In the UK, in comparison to markets like Australia, designers don’t have as much experience of working with post-tensioned concrete

According to Pell Frischmann divisional director Mike Hitchens, this was partially due to a novel approach to the procurement and design of the floor slabs. He says: “In the UK, certainly in comparison to markets like Australia, designers don’t have a huge amount of experience in working with post-tensioned concrete. What tends to happen is that a consultant engineer will estimate the slab depth and then specialist engineers are often brought in to complete the design. We eliminated waste and created efficient economies of scale by having our experts research the technology and devise a solution ourselves.”

That solution involved constructing a floor slab system that alternated in line with the building envelope. About 24,500m2 of concrete was used at Buckingham Gate and the floorplates measure around 100m x 40m. But the envelope is comprised of folding planes of glass that wrap around the building like a crumpled, tilting skin. Consequently, the distance from core to building edge varies from floor to floor from around 14m to 16m.

For the 14m clear spans, which constitute 80% of the building floor area, a standard 365mm-deep flat-slab version of solid post-tensioned reinforced concrete floor slab was used. But for those areas where up to 16m spans were required, the 365mm depth could not be maintained without unacceptably aggravating the risk of deflection. So in these instances void formers were used to incorporate 150mm-wide downstand ribs into the slab at 450mm centres. 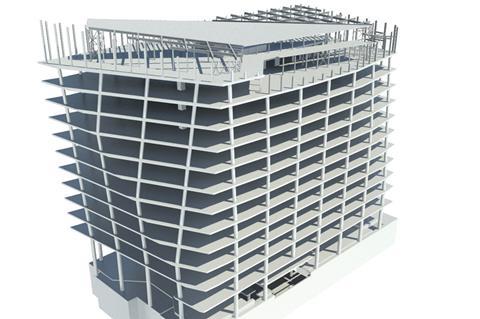 A structural model of the scheme 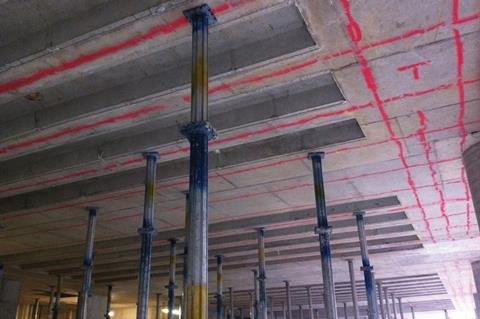 Coffers formed in the ribbed slabs

Although Hitchens admits that contractors typically prefer flat slabs for the additional convenience they allow with regard to services and finish, the ribbed post-tensioned slabs have less deadweight and, therefore, increased efficiency. Despite the insertion of post-tensioned tendons into the ribs, the amount of post-tensioning required overall was reduced.

Critically, this system enabled the ribbed post-tensioned slab to achieve deflection levels well below the 10mm limit specified over a 100-day period. This was in compliance with the strict Institution of Civil Engineers and Institution of Structural Engineers Eurocodes for structural performance.

Functionally and spatially, the benefit of this system is an uninterrupted and column-free span of 16m from core to exterior wall. Structurally another benefit was the ability to incorporate long-span cantilevers at certain locations within the floor slab. At the building’s entrance corner, load-bearing columns are set back from the structural line and building edge in order to ease the flow of pedestrian traffic and create a landmark visual feature for the building. The additional spans permitted by the ribbed post-tensioned system enabled a significant cantilever at this location which, in Hitchens’ words, “increased the dynamic and dramatic impact of the design”.

There is also a final unexpected post-tensioning innovation at 62 Buckingham Gate. Up to 30% of the concrete at the development is composed from ground granulated blast furnace slag (GGBS). GGBS cement is not normally considered appropriate for post-tensioned concrete applications as it requires a longer setting time than conventional cement and strength development can be significantly slower. However, as GGBS is essentially a low-carbon by-product of the steel manufacturing process, its use is considered environmentally beneficial and it therefore significantly enhances the sustainability credentials of the 62 Buckingham Gate development while maintaining the required strength levels for the concrete slabs.

Hitchens admits that the ribbed post-tensioned floor slab system may not be appropriate in all instances and would certainly be harder to justify on shorter spans.

Nevertheless, its use at 62 Buckingham Gate is an appropriate and innovative structural response to the folding envelope of the building. Moreover, its ability to realise a precipitous span of 16m while maintaining a relatively thin slab depth of 365mm represents yet another step in the evolution of post-tensioned concrete applications in the UK. 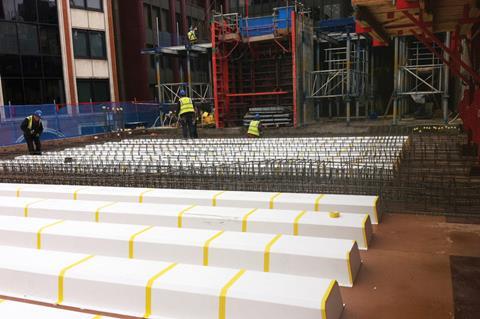 Void formers and reinforcement in place, prior to the concrete pour