Twelve years from now, there will be 70% more construction work going on around the world. Building reports on the findings of Global Construction 2025 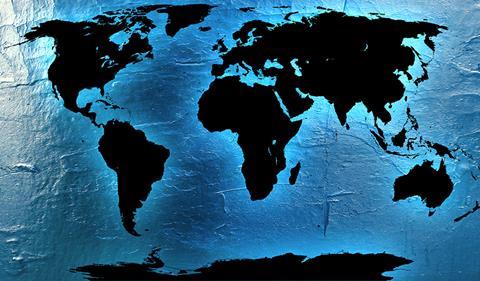 With market conditions still tough for the UK construction industry, it can be tempting to focus on the here and now. When surviving until 2014 - at which point output is forecast finally to pick up - is the order of the day, it can be difficult to take the long-term perspective. However, it is worth considering what may be around the corner.

Who knows? It might even put a smile on your face.

This week saw the publication of Global Construction 2025, the third report in a series of major global studies put together by research firms Global Construction Perspectives and Oxford Economics. The report focuses on the world’s 46 biggest construction markets and provides detailed analysis of the future shape of those markets and output forecasts up to 2025, alongside historical data going back to before the world’s economies had a collective heart attack in 2007.

The results of the survey make for a fascinating read. For instance, the report predicts that construction output globally will grow by 70% over the forecast period, on average by 4.3% a year, from $8.7 trillion in 2012 to $15 trillion by 2025. Taken as a share of world GDP, construction last year accounted for 12.2%, and the report forecasts that will rise to 13.5% by 2025.

Global Construction 2025 also makes it clear that most growth over the next 13 years is to be found in emerging markets. The report concludes that in 2025 construction will on average account for 10.3% of developed economies’ GDP, compared with 16.7% in emerging markets. Much of that growth is also accounted for by a single country. By 2025, the report forecasts, China will represent a quarter of global construction output.

The following pages also contain some rays of hope for companies unable to take advantage of opportunities abroad. So relax, sit back, pull up a chair - and prepare to take the long view.

Perhaps surprisingly, the outlook for the US is very positive, with growth of over 75% forecast between 2012 and 2025. The report says that potential growth in the housing sector is particularly strong, anticipating that the country needs to build 20 million homes by 2025 - or 1.5 million a year - driven by a rapidly increasing population.

The outlook for Canada is strong too, with close trade links to the US, high rates of population growth and the exploitation of oil and shale gas reserves all helping to boost construction output. In addition, the neglect of Canada’s highways, sewers and other basic infrastructure has now come to a head and both federal and provincial governments have reacted with a long-term programme of investment.

THE UK AND WESTERN EUROPE 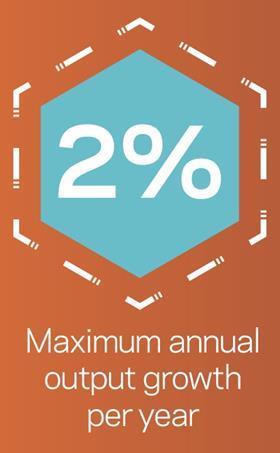 First the bad news. Taking western Europe as a whole, Global Construction 2025 predicts that the region’s construction market will be 5% smaller in 2025 than in 2007. This is due to a combination of declining real wages and unemployment having a negative impact on housebuilding, as well as high levels of public debt meaning there will be little funding available for infrastructure investment. The report forecasts that output growth will struggle to reach 2% in any year between now and 2025.

However, the news is rather better for the UK. Due to a pressing need for new homes and renewed infrastructure on the one hand and the apparent willingness of Chinese and Middle Eastern sovereign wealth funds to invest in UK infrastructure and real estate, the report forecasts that UK construction output will grow at 2.1% a year on average up to 2025 - twice the rate of the western European average. It concludes that by the end of the forecast period the size of the UK market will rival that of Germany’s, with output of $315bn and $342bn respectively.

While the population of eastern Europe is forecast to decline by 0.2% a year over the forecast period, the report says that strong economic growth should lead to increased construction demand. It expects output to grow on average by 4.6% a year over the next 12 years, marginally higher than the global average. However, there are marked differences between countries, with the best performers, Turkey and Russia, predicted to see average annual growth exceeding 5%. Russia is expected to move from being the ninth largest construction market in the world in 2012 to the sixth by 2025. Growth in Turkey is forecast to be, if anything, higher than in Russia, with rapid urbanisation and the need to replace and upgrade the country’s housing stock driving growth. 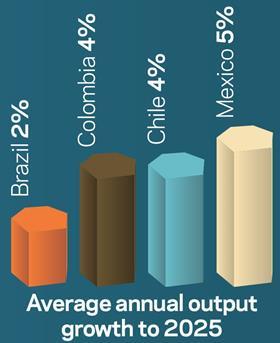 Growth in construction output across Latin America is expected to be below the global average, largely because most countries are already highly urbanised. For instance, the continent’s largest construction market, Brazil, is only expected to see average annual growth of 2% between 2012 and 2025, despite the fact that the country is playing host both to the 2014 World Cup and the 2016 Olympic Games.

Global Construction 2025 also identifies a key growth opportunity in Latin America: affordable housing. In Mexico alone, the report identifies a housing deficit of some 8.9 million homes. It says that in Latin America and the Caribbean almost 60 million people live in homes classified as unfit for habitation. This, the report says, provides opportunities for companies prepared to develop cost-effective mass housing solutions. In total, the report predicts that 27.5 million new homes will be needed in Brazil and Mexico alone by 2025. 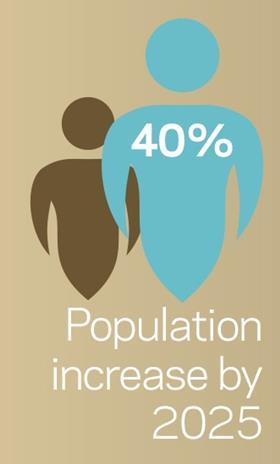 With a population due to reach 1.2 billion by 2025 - over 40% higher than today - the report predicts that construction growth in sub-Saharan Africa will be higher than all but the emerging Asian markets over the forecast period. The region’s urban population is expected to grow by 70% and to become more middle class, with all the housing, transportation and social infrastructure requirements that that entails.

The report expects Nigeria to achieve the second highest growth in construction output - of 8% a year. It says that slightly fewer than 1.5 million new homes need to be built every year until 2025, making the country the fifth largest housing market in the world.

Qatar is expected to have the fastest growing construction market of all countries examined in Global Construction 2025 with average output growth of 10% a year. However, much of this can be attributed to the country hosting the 2022 World Cup and the report anticipates that growth will slow significantly after 2020. 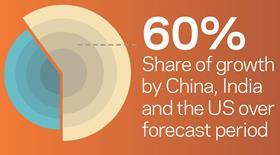 The report anticipates that output in India will grow by 7.4% a year on average to 2025 - higher even than China, driven by huge growth in population and middle-class households in particular. It adds that India will overtake Japan as the world’s third biggest construction market by 2022. The report predicts that China, India and the US will together account for 60% of growth over the forecast period.

INDONESIA, VIETNAM AND THE PHILIPPINES 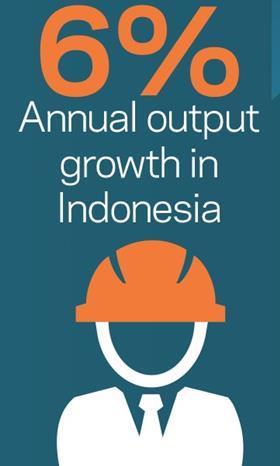 However, the huge and growing Chinese economy has opened up opportunities for other countries in the region and the report names Indonesia as “perhaps the most dynamic new Asian tiger construction market”. The report predicts that Indonesia’s average construction output growth a year will be 6% from 2012-25, and that in the same period it will move from being the 10th biggest construction market in the world to the fifth.

Similarly, the report predicts that Vietnam and the Philippines will achieve average annual growth of over 5% across the forecast period.

China overtook the US in 2010 as the world’s largest construction market and now accounts for 18% of global construction. However, by 2025 the report anticipates that the country’s market share will have grown to 25%. The report predicts that annual construction output growth in China will slow over the forecast period, but still anticipates growth of around 6% a year between 2020 and 2025 compared with 8.5% currently.

While the outlook for Japan is positive in the short term, Global Construction 2025 forecasts weaker growth in the long term. The country’s construction industry is busy with redevelopment work following the March 2011 earthquake and tsunami, and has been boosted by government policies to deal with deflation and shake off two decades of economic stagnation. This includes a fiscal stimulus of 2% of GDP, which should improve prospects over the next two years. However, the report forecasts that Japan’s declining population will ultimately offset these factors and predicts output growth will slow to 1% in the medium term.

Global Construction 2025 makes it clear that the construction boom in Australia is over. Investment in the country’s mining industry is slowing, it says, with the industry moving from building capacity to a largely production phase. The report adds that this will have a marked impact on construction output, with annual growth rates slowing from an average of 4.4% a year in 2005-12 to 1.3% by 2025.