How the Olympics and Jubilee are driving London projects

The Olympics and the Diamond Jubilee have given the capital a real lift this year and all sorts of projects that were languishing in the design drawer are now busily being prepared, spurred on by civic pride and that unyielding deadline. Ike Ijeh looks at the best of them

The American writer Rita Mae Brown once sourly observed that “a deadline is negative inspiration. But it’s better than no inspiration at all”. London, a city whose approach to urban infrastructure improvements can at best be described as glacial (it took 17 years to decide whether or not to part-pedestrianise Trafalgar Square), needs all the inspiration it can get. Luckily, deadlines don’t come much bigger than the Olympic Games. The impact of the Games on the east London enclaves around the Olympic park is already obvious. But the rest of London too is in the throes of an unprecedented urban clean-up operation to ensure that she looks her best when the eyes of the world are upon her this July.

Across the city roads and paths are being repaved. Facades are being cleaned. Lighting is being repaired. Trees planted. Even London’s diaspora of road works is finally being dismantled - even if only temporarily. And projects that have lain dormant for years have suddenly sprung back into life and those already under way are
determined to finish in time.

In the words of Mark Allan, project leader of the Leicester Square redevelopment project at Westminster council, the Olympics has “driven the will to complete packages of work before the Games begin.” Baroness Valentine, chief executive of lobby group London First goes even further. “The spotlight of the Olympics has focused the minds of business, boroughs and the mayor to deliver a constellation of public realm improvements - vital to help show central London at its best so that visitors and potential investors from across the world can see exactly what the capital has to offer. Importantly it shows what can be achieved if the will is there.”

Of course 2012 isn’t all about the Olympics; the Queen’s Diamond Jubilee will also help London and the UK command centre stage this summer. But whether viewed in isolation or together there can be little doubt that both events have produced a rare alignment of collective will throughout London’s civic community and provided a once-in-a-generation impetus to improve her public realm. In a city often wracked by feudal wrangling and bureaucratic inertia, this is no mean feat. 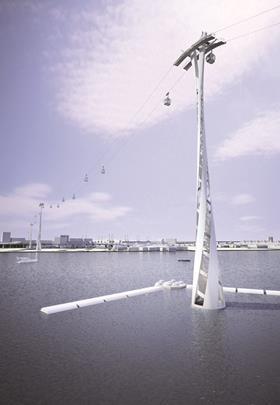 This summer, London will join the ranks of Hong Kong and Rio in having its own urban cable-car system, the first of its kind in the UK. Spanning the Thames between North Greenwich and the Royal Docks, the 50m high permanent installation aims to ferry 5,000 passengers an hour between key Olympic venues. The proposals attracted criticism when the budget doubled and it emerged that the mayor’s initial commitment to secure private finance was untenable. In a part of London crippled by woefully inadequate river crossings, many also view it as little more than a corporate junket to ease the transfer of businessmen from the 02 to Excel but of little strategic value to local transport or economic infrastructure. Nevertheless it is undoubtedly a visionary piece of planning and engineering and at close to £60m is one that would probably have been nconceivable (as a public sector project at least) without the Olympic Games.

The London borough of Greenwich has more reason than most to spruce itself up for 2012. Not only will it be hosting equestrian and gymnastic events during the Olympics but the Queen has elevated it to coveted “Royal Borough” status as part of her Diamond Jubilee celebrations. According to Kevin Fewster, director of the National Maritime Museum, “[2012] is an exciting time for the area. Our buildings will house LOCOG officials during the Games and our new wing is our contribution to this activity”. Arguably Greenwich’s most high-profile building project is the £50m restoration of the Cutty Sark, damaged by fire in 2007. Set to reopen this spring dramatically suspended above a new visitor centre designed by Grimshaw and Youmeheshe Architects, the development is as a useful metaphor for the dynamic combination of old and new that informs several London 2012 venues. Re-landscaping of the riverside gardens and plaza around the ship should also be complete in time for the Games.

Few locations express more forcibly the complexity, farce and paralysis that institutionally afflict London public space development than Jubilee Gardens. On this bizarrely neglected stretch of prime riverside parkland, the Southbank Centre owns the grass but the Shiriyama Corporation (landlords of County Hall next door) owns the subsoil. Buried deep within this quixotic legal riddle lies a recipe for the decades of dithering and delay that have continually frustrated plans for its redevelopment. Until now. Construction started last October and the new £5.5m park will open to the designs of Dutch urbanism collective West 8 in mid-May. Alan Bishop, chief executive of the Southbank Centre, points out that a key contributory factor to unlocking the funding and framework that finally enabled the project to proceed after so many previous false starts was the determination to transform the space “in time for the Diamond Jubilee and the Olympics”.

Despite its shell and core construction being scheduled to finish in May 2012, Renzo Piano’s Shard cannot reasonably claim to be an Olympic-related project. The building was designed in 2001 and its completion date owes more to the bureaucratic ineptitude of London’s high-rise planning process than it does to municipal convergence. Nevertheless, the symbolic resonance of its completion date is unmistakable and the Shard perhaps provides the most powerful architectural embodiment of the Olympian ideals of aspiration and progress outside the Olympic park. As Western Europe’s tallest building it also conveniently lends itself as yet another instant global icon with which London can bolster its claim of civic rebirth in its landmark year. Its completion just a month before the Queen’s Diamond Jubilee seals what, in hindsight at least, must be one of the most serendipitous construction programmes in history.

As the central London terminus of the Javelin trains that will transport millions of ticket-holders to Stratford this summer, King’s Cross St Pancras plays a critical role in the operational logistics of London 2012. So there is clear practical as well as civic motivation to ensure that the station’s extensive £1bn redevelopment finishes on time. For years it was one of the most clogged arteries on the tube and rail network. But commuter experience has already been transformed by the new underground interchange that opened in 2010. Opening this summer is John McAslan + Partners’ western concourse, a majestic elliptical shell that should hopefully banish all recollection of the dismal corrugated hut that currently performs the same function. This present concourse is set to be demolished in 2013 and will be replaced by a new public square. Blackfriars station is also set to emerge from its lengthy rebuilding programme by the summer. 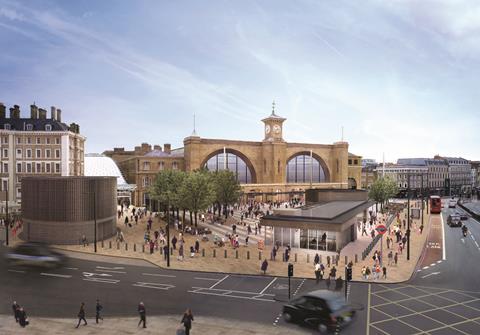 In anticipation of the additional tourists expected to visit the West End during the Games, key public spaces across central London are being improved. Landscaper Burns + Nice’s £18.5m Leicester Square scheme will be unveiled in April pledging greater integration between the central gardens and the remainder of the square and a more dramatic backdrop for film premieres. The scheme is part of a local programme of public realm improvement works and follows on from the reintroduction of two-way traffic in nearby Pall Mall and Piccadilly late last year. Haymarket will follow after the Games. Kensington’s Exhibition Road has also recently reopened as a radical shared space by architect Dixon Jones and will also be used as a Cultural Olympiad venue. But one major blot on the public space horizon promises to spoil the party and broadcast national embarrassment to a global audience. The tents may finally have been removed but thanks to legislative impotence and mayoral indifference Parliament Square remains an urban design mess. 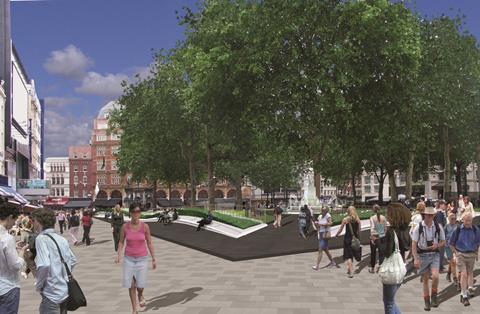