International salary survey 2018: Moving up in the world

This year’s Hays International Salary Survey shows lucrative opportunities in some overseas markets, but candidates are increasingly choosing to stay in the UK as the skills shortage provides certain employment and international recruiters become less likely to target UK-trained workers 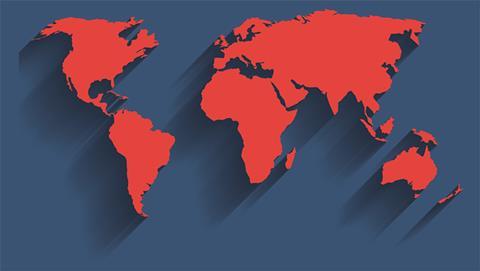 Brexit may be looming but the prospect hasn’t yet forced an exodus from Britain’s construction industry, despite the temptations awaiting in several English-speaking countries.

The latest international salary survey by recruiter Hays reveals strong opportunities for UK construction professionals in several economies, with demand for construction professionals increasing in New Zealand and Ireland, while staying solid in Australia, Canada and the Czech Republic. Quantity surveyors, civil engineers, and site and project managers are the most in demand, owing to skills shortages and several large projects under way in Australia, New Zealand and Ireland.

The health of the global economy means multinational construction companies are competing for talent. “At the moment, our whole global practice is busy, and finding good-quality staff – from anywhere around the world – is a challenge,” says Ann Bentley, global board director at Rider Levett Bucknall. “We see this continuing into the medium term and so there will be plenty of overseas opportunities for UK-trained staff.”

Demand for UK candidates has increased as a result of a buoyant market. The survey shows that engineers with four to six years’ experience are particularly valued and newly-qualified workers and graduates in the field are increasingly well paid. Large-scale commercial projects such as the Facebook headquarters in Dublin dominate, with healthcare, educational, residential and associated civil engineering projects on the rise – Capital Dock and the national children’s hospital among them. The language, distance and similar culture mean it is an easy place for UK professionals to relocate to.

However, while skilled workers with UK experience are welcome, most countries are not specifically or actively recruiting them or offering relocation packages. Indeed, in one country surveyed – Singapore – the number of British candidates securing roles has decreased, despite the country’s growing economy, with employers preferring local candidates.

But bare facts can be deceptive, says Richard Gelder, director of Hays Construction and Property. He believes it is not so much a question of UK-trained recruits being less attractive than they were, and more that the British market is keeping hold of them. “During the last recession, the UK was a hard environment to work in and lots of people were looking abroad,” he says. “Today, most employers here are actively looking to recruit so that takes a huge amount of the drive out of people looking overseas.

“[In turn,] employers overseas looking at the UK market know there are fewer people looking for work, and they are taking a pause for breath – on an advertising campaign, for example, the return will be less than it would have been a few years ago, and that’s before the costs of the recruitment process.”

Canada’s construction market is buoyant, with Toronto particularly busy – more than C$16bn (£9.32bn) of investment in transit is under way, as well as a number of major public-private partnership and design and build projects. Commercial and industrial projects are strong in Montreal, which is also set to have a C$6bn (£3.49bn) electric train project over the next five years. Interest rate changes and new investment regulations have somewhat tempered demand in the housing market. Quantity surveyors are in particular demand. It is easy for expats to adjust to life in Canada. Typically employers won’t offer a relocation package for expats, unless they are transferring internally from a company. From a benefits perspective, they can expect contributory pensions, performance-related bonuses, private medical insurance, life insurance, company car allowance, company mobile phone, family benefits such as childcare, generous maternity and paternity leave allowance (above the UK minimum), and training support. However, permits and visas must be arranged independently.

The sense that staff are less willing to move abroad is one that Richard Steer, chair of construction consultancy Gleeds, shares. “During the 2008-10 recession, we could get good people to go overseas relatively easily, but today it’s difficult to tempt people to leave the UK,” he says. “There’s a skills shortage here and conditions elsewhere aren’t quite so generous these days [as they used to be].”

He had believed that after the Brexit referendum there would be a reduction in workload but says that has not manifested itself yet. “There has been an increase in public sector and infrastructure work and a decrease in private commercial work, but they have balanced themselves out. And the global financial crisis took a lot of people out of the industry, so we are still suffering from that.”

The only non-English speaking country in this year’s survey, the Czech Republic has a healthy economy, a growing construction sector and low unemployment, with demand for candidates high and salaries up by 10% since last year. However, if you want to work in the country, it is essential to speak Czech, as well as having local experience. It is a particularly attractive location for junior candidates – for example, those from other countries who go to Czech universities to study and then remain in the country to work.

In the longer term, he says, technological change might disrupt the job market, but he doesn’t think that is likely for at least five years. “I don’t see a mass exodus of people at the moment and I think it would have to be quite a deep recession to start putting people overseas again.”

Of course, there are other factors that affect recruitment flows rather than just the relative strength of economies. For a global business such as Gleeds, “having expats as part of the team is a very expensive overhead”, Steer says. “In our India office, we have two expats out of 275 people. That’s our model virtually everywhere, as we expect offices to be part of the local community and working as part of the local situation.”

In many countries, he adds, language is also an issue for British candidates. “It’s difficult to get someone from the UK to work in, say, Prague or Warsaw, as the work is carried out in local languages.”

It’s a candidates’ market in Australia, with continuing demand for British workers, against a strong economic backdrop. Over the past five years there has been a residential boom in Sydney and Melbourne, which has yielded plenty of work. Several large infrastructure and rail projects are also under way, creating demand for professionals with large civil infrastructure experience. The commercial building sector – schools, hospitals and commercial space – is also strong in Sydney, Melbourne and Brisbane. It’s easy for British workers to adjust to life in Australia, and construction professionals usually find their skills compare favourably with local talent.

RLB’s Bentley says the Hays findings do reflect her experience overall, although she feels that New Zealand and Australia are still interested in recruiting from the UK – perhaps for reasons other than just the local economy. “Australia is losing staff to the US at the moment,” she says, explaining that in her experience it is easier for Australians to get US work visas than for British citizens. Following the visit to the White House by Australian prime minister Malcolm Turnbull in February, one of the things agreed was an easing of the visa process for Australian nationals applying for jobs in the US.

“We are also seeing a steady flow of Australians and New Zealanders coming to the UK for a couple of years and then returning home,” she adds.

New Zealand has a robust economy, and demand for foreign workers over the past year has increased – and is expected to remain at that level. A recent population boom has resulted in many new commercial, residential and civil construction projects, both public and private. The local market does not have enough skilled workers with large project experience, so many are looking overseas. If a UK citizen has a skillset or expertise listed on the Australia and New Zealand skilled occupation lists, they have an easier path to residency and employment, although the government is currently reviewing its immigration policy.

Alongside this, Bentley is witnessing a revival of recruitment of UK staff in the Middle East, particularly Saudi Arabia, as a result of the crown prince’s modernisation programme, coupled with the rise in the global price of oil. In December the state unveiled a $19bn (£14.1bn) stimulus package, which includes subsidised loans for housebuilders and developers, following several years of a flat construction market.

It is impossible to tell what might happen in the UK over the coming years. The economy seems stable although growth is slowing, but the country is mired in political and economic uncertainty, which is perhaps reflected in Hays’ discovery that employee movement across the construction sector in the UK has slowed – only 54% of workers are looking to move jobs this year – compared with 61% the year before. This may not necessarily reflect nervousness among candidates about what is to come, but it’s fair to say that anything could happen as the UK pulls out of the European Union.

The only place in this year’s survey where demand for expats has declined is Singapore – employers prefer local candidates, although opportunities do exist for people with the right qualifications. Business confidence and optimism in the economy are growing and, in the construction sector, there has been an increase in large-scale infrastructure work and continuing opportunities created by public transport and hospital upgrades, particularly for those who can assume a senior position in long-term projects. Since English is one of the main languages, it is an easy place to relocate and adjust to.

Salaries for roles most in demand

The Hays Construction International Salary Guide 2018, in association with Building, is based on salaries of candidates placed by Hays in the past 12 months and salary expectations for UK expats. The top five roles are those in demand from Australia, New Zealand, Singapore, Canada, Ireland and Czech Republic. The US was unable to provide salaries this year.

UK figures are typical salaries reflecting the findings of the Hays UK Salary & Recruiting Trends 2018. The guide is compiled by staff worldwide who understand the local markets and are specialists in the built environment. The salaries are typical annual salaries for permanent positions and are guide figures only, due to possible discrepancies in terminology, purchasing power and local variations. They also do not take into account local government tax regimes, hours of work and currency of payment. The salary figures have been converted into sterling, based on conversion rates applied in May 2018.