After an 18-year hiatus, Autodesk this month confirmed rumours that it is once again releasing a Mac version of its AutoCAD design software. Apple has made big inroads into the business community in recent years and Autodesk says its return reflects Apple’s resurgence in the computer world and its popularity among the creative design community. At the same time it also announced the launch of a mobile version of the software called AutoCAD WS. This will be available free for Apple’s iPad, iPhone and iPod Touch and will allow users to edit and share their AutoCAD designs in the field. As Miikka Arala of Autodesk says, young people today are very Mac savvy and very mobile savvy. “When these people mature, there will be a generation shift in the technology being used”.

But this shift could already be happening. The introduction of the Apple iPad earlier this year has stirred plenty of interest in the construction sector where many believe it could be “the next big thing”.

Paul Wilkinson of consultancy Pwcom 2.0 predicts that the technology is growing in importance. “I don’t think it will take over from laptops and desktop pcs but it will find a niche. People are already using tablets and the iPad will tap into that market.”

John McRae, director of architect ORMS also sees the potential. “I was at a presentation a month ago where someone used an iPad. He simply passed it around which I thought was particularly clever. For communicating and presenting design it’s very, very helpful and you can update your design on the move before the next meeting if you need to.” If they could build a projection device into it, that would be a fantastic piece of kit, he adds.

Of course, mobile technologies already exist in the construction sector, but just as the market for smartphones was kickstarted by the arrival of the iPhone, so the iPad will spur on its emulators. The number of companies producing alternatives, variously known as slates, tablets or palettes, looks set to soar, together with their applications (see over).

On the face of it an iPad looks just like an oversized iPhone with its familiar sleek, flat black screen and a single button for turning it on and off. It also uses the same touch screen commands. But it has distinct advantages over its smartphone cousin.

The obvious one is its physical size. With a large screen it is easier to view things and this is a boon for anyone wanting to review, comment on and edit drawings or scrutinise a detail. According to Arala, the idea behind the Autodesk app is that it makes the iPad a handy site tool. For example, somebody could compare the detail that is being constructed with the drawing.

Firms such as Woobius, an online collaboration provider, also see the attraction of a bigger screen. The company is developing Woobius Eye, a tool that allows users to upload a photograph or take a screen shot of a drawing and then mark it up and point to it in real time while having a telephone conversation. An iPhone and an Android application are on their way that will enable, say, an architect on site to have a conversation with someone back at the office while talking over a drawing or a photograph. Having more screen to work with is an obvious advantage.

A larger display also means it is easier to use the touch screen, especially if you are in an environment where you have to wear gloves. 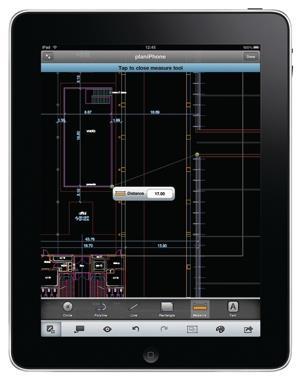 Processing power is a factor, too. This can be a big advantage when using online applications. As Colin Smith, chief executive of collaboration software company BIW Technologies, points out, processing power enables you to work offline and then sync all the information with the central database when you get back to the office or somewhere with internet access. This is a benefit if you’re working in a remote location or even on a city centre building site where there is no Wi-fi.

BIW’s core products are all about sharing and disseminating information among the project team. At the moment users can get real-time headline data sent to their BlackBerries, which is helpful but not life changing. However, the firm is also developing an application for defects management that would generate a checking schedule that someone snagging on site could fill out. That person could then send the contractor in charge of the package details of the exact location and the problem. They respond when the problem is sorted out, enabling an audit trail to be kept.

“That’s where we see tools like the iPad being really beneficial,” says Smith. “The trick is to get the device to understand where you are in the building so that it predicts the defects you are likely to come across and generates an appropriate snagging list.”

Ian Keough, an associate in Buro Happold’s New York office, has developed an application for the iPad called goBIM, which is a building model viewer. “I wouldn’t have spent all this time developing software if I didn’t think it was the next big thing,” he says.

However, he adds that iPads have the power to run 2D drawings but not 3D models “as they have only got cellphone brains”. He doesn’t see this as a disadvantage, though, as people will use them just to look at small areas of drawings. “You have instant access to the drawing and you can look at it in the on-site condition. You can take an image of what’s been built and tie it into the drawing, and include the location and add a sketch, then email it off.”

Keough also thinks that the Android operating system used on alternative tablets shouldn’t be overlooked. Companies such as Autodesk have turned to Apple apps as these are aimed at architects in wealthy places such as the US where they mostly use Macs. But Android is “huge” in China and the devices are going to be cheaper, he says. “It’s going to be interesting to see if the big computer and laptop makers pick up Android in the same way as the iPad.”

I think very soon we will be returning to drawing boards but with A1 or A0 touch screens. The technology is there but it’s just too expensive

One of the areas where the technology could take off is with maintenance and facilities management firms. According to Wilkinson, it’s ideal for “van-based” operatives who are travelling from site to site and need to be given notification and details of jobs and sign-off when something is complete. “It’s also a way of keeping track of what materials and parts have been used so that they can be re-ordered ready for when they return to the depot.”

Of course there are downsides. An iPad might be the perfect accessory for an architect at a client meeting, but is it really suitable in the hands of a piling contractor ankle-deep in mud? There are firms such as Motion Computing that make rugged tablet pcs with touch screens which are designed for extreme environments. They are dust and splash-resistant and can withstand vibrations and occasional drops. But with prices starting at about £1,600 - compared to £430 for an iPad - it’s a cost many contractors find difficult to swallow. “Some customers have done the cost analysis and decided that actually it’s not worth spending the extra on a rugged device and opt for the normal versions, accepting that some will break and have to be thrown away,” says Smith.

The construction sector isn’t renowned for embracing new IT, but the prediction is that over the next couple of years mobile technology such as iPads and slates will grow. But Greg Lomas at Foster Lomas Architects says even more exciting is the possibility of touch screens in the studio. “I think very soon we will be returning to drawing boards but with A1 or A0 touch screens. The technology is there but it’s just too expensive. I would say within two to three years Bentley and Autodesk will be bringing products out for that - I cannot wait. At that point a design studio could become close to paperless.”