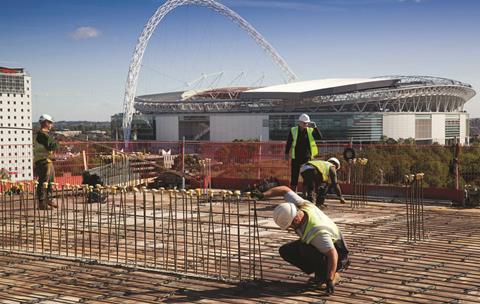 While Willmott Dixon has seen a small contraction in its construction and overall group turnovers in the last year, its operating profit from its construction activities has grown by 3% to £35m on a turnover of over £1bn. The company has also seen significant growth in the last three years, with construction turnover up 4%, overall turnover up 6% and construction operating profit up 9%. In terms of recent projects, Willmott Dixon highlights its work for Tesco at Woolwich Central and its work on standardised schools design, which led to the development of a product called Sunesis. The last year has also seen Willmott Dixon invest £3.5m in training and development, including the creation of the Willmott Dixon 4Life Academy in Birmingham - a facility capable of training 2,000 people a year.

Galliford Try’s financials for the last year have been robust, with construction turnover up 17% in the last year to £1.5bn. Perhaps more remarkably, operating profits are up 76% over the same period and up 102% over the last three years, currently standing at £63m. The company also saw its share price rocket by 165% in the last 12 months to 785p (correct at 9 January). The company says that it has increased its market share to become the largest contractor in the UK water sector and has increased its portfolio of commercial developments, particularly in the South-east. In terms of individual projects, Galliford highlights the fact that its Scottish brand Morrison Construction has started work on the Forth Road Bridge project.

While Mclaren’s construction operating profit fell over the last year by 23% to £5.4m. Turnover, however, was up substantially by 43% to £382m. The longer term financial picture is also more positive. In the last three years construction turnover increased by 150%, while operating profits were up 58%. The company reports that it has seen continuous year-on-year growth in turnover for the last four years. In line with the Mclaren’s growth strategy, the firm has developed its business in the London market, in the last year seeing its turnover in the capital grown from £11.3m to £51m, with new projects in the commercial, retail and leisure sectors. The last year has also brought significant new contract wins with high-profile clients such as Tottenham Hotspur FC, Land Securities, Jaguar Land Rover and Derwent London. Senior appointments in the Midlands, North-east and North-west have also led to contract wins with firms such as Asda and Morrisons.

While Sir Robert McAlpine did not provide figures on its profitability or otherwise for the last 12 months, the company highlights projects such as the Emirates stadium and Bulgari Hotel in London, and the Sir Chris Hoy Velodrome in Glasgow as recent success stories. It adds that the wide range of sectors in which the company works, from nuclear facilities to education, transport and commercial developments, reflect its ability to tailor its approach to meet clients’ needs. The firm also reports that it has a strong health and safety record, pointing to its work on a 120km section of the A19 in the North=east, where the company clocked up more than a million man hours without a single Riddor-reportable accident.