Mott Macdonald's Keith Howells: 'It's a bit like star wars' 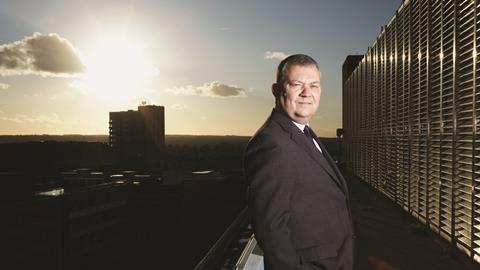 How should the UK’s largest independent consultant respond to the ‘evil Empire’ of consolidated corporations taking over the market? Mott MacDonald chairman Keith Howells tells Building about the company’s plans to strike back. Tom Campbell photography

He’s talking about the “nuclear arms race” happening in the consultancy sector - the trend towards consolidation among firms and the growth of the supersized consultant.

The “rebels” in Howells’ analogy are independent, employee-owned consultants such as his own. The “evil Empire” consists of the large listed corporates that Howells claims are close to crowding out the market.

The 58-year-old clearly does not want for fighting spirit - Mott MacDonald was embroiled in the UK construction industry’s biggest ever law suit over its work on Multiplex’s Wembley stadium before settling out of court (see box, overleaf). But behind his “evil Empire” joke is a serious dilemma - should the second biggest consultant in the UK merge to compete with the listed giants? Or is it happy to stay independent?

Howells admits the firm will “probably” explore merger options within the next 10 years. Before that, however, it is returning to a strategy that has served it well over the past decade: expansion. “It’s always been business folklore that you don’t want to be in the middle,” says Howells, sitting in his ninth-floor office in Croydon. “The issue is whether we end up in the middle as others stretch away.”

Keeping up with the Harrises

It may seem surprising that Howells is mulling over the need to significantly gear up £1bn-turnover Mott MacDonald again, so soon after a five-year period in which it doubled turnover through major expansion. Between 2004 and 2009 - when Howells, who has spent his entire 36-year career at the company, was managing director - it grew from £485m to just over £1bn. There were no fewer than 20 acquisitions - eight of which were in the US, including Hatch Atlantic Infrastructure, Higgins Associates and Rail Technologies. The company’s rate of growth has slowed since then - to 3% in 2010 and 2011 - but Howells is proud the firm is “still growing … there are many who are not”.

“If you’re not growing, you’re either standing still or shrinking, and neither is very comfortable,” he says. “If you’re growing, you’re creating opportunities for people, and in theory you should be improving the business and making it more profitable.”

The strategy now is to expand by a further 3-5% over the next two years and faster thereafter, by increasing its presence, including acquisitions, in “resource-driven” economies, such as Australia, Canada and Brazil, where oil and gas and mining add another dimension to the sorts of opportunities available.

“In the UK we’re big - fine, we’re up there,” Howells says. “But in the globe we’re 15th. That’s fine, but if we were to drop down to 30th or 40th because we were overtaken by lots of other people - that would probably be uncomfortable.”

You can understand why Howells is wary. The last couple of years have seen some mega mergers in the consultants sector, with Scott Wilson, EC Harris and Davis Langdon all getting snapped up by overseas-based listed consultants - URS, Arcadis and Aecom respectively. Halcrow was also bought last September, but by a fellow employee-owned engineer, US-based CH2M Hill.

Howells doesn’t see any reason for this trend to end. “I ask myself the question, why would it stop? And there isn’t a good answer to that. Because the big companies are sitting on cash and they’ve got nothing else to do with it and they seem prepared to pay over the odds for small companies. Small companies are feeling a bit fragile so they’re worried about scale and opportunities so it’s quite easy for a big guy to come along and say, ‘Come and join me, you’ll be secure’. The only way it’s going to stop is if there’s a strong economic recovery and those small guys start feeling comfortable again and ask, ‘Why should I sell my business?’”

It is these market dynamics that have led Howells to consider a merger within the next decade. “The most likely thing for us would be to find an employee-owned company of similar size or smaller and merge with them,” he explains. “[But] you’ve got to find a willing partner and that’s not always easy.”

Merging may be on the cards but Howells draws a distinction between Mott MacDonald and its listed rivals. He has clear disdain for the notion of listing - the firm has “no intention” of doing so, he says. “We don’t have any external shareholders poking their noses in the business - who know nothing,” he says. “It gives us a lot of freedom to manage our own destiny.”

Mergers aren’t the only issue on Howells’ agenda. He’s conscious that there’s a sizeable gap in Mott MacDonald’s global network of 186 locations. “The big hole for us is South America,” he says. He explains it has always been on his list, but now, having set up bases in South Africa, Australia and Russia over the last five
years, the region is firmly in his sights. He visited Brazil on a reconnaissance trip last autumn and says the firm is considering setting up a permanent base there for the rest of South America.

The only hitch could be the potentially high cost of entry. “You can’t do an organic start-up in Brazil - it’s almost impossible. If you want to get anywhere in a reasonable timeframe you need to buy something, and right now companies are realising that the world fancies a bit of Brazil and they’re asking a lot of money. It would be an expensive buy if we wanted to do it.”

Howells expects the resource-driven economies to provide the best growth opportunities over the next few years, and says the firm is targeting infrastructure work linked to the global mining boom. “Mining companies are having to do more of the infrastructure themselves as mines become more remote. We’re very interested in doing more in the mining infrastructure sector.”

He also sees potential for the firm in Iraq. Mott MacDonald was “pretty much there when the war ended [in 2003], getting water and power up and running”, and has been in the country ever since - latterly working on projects for oil companies including Shell, BP and Exxon. He believes Iraq could be “the biggest construction project in the world at some point in the next 10 years, providing it can get over its political issues”.

The company is also “watching” Libya, after attending a trade mission to the country in January. Howells admits the firm was “lucky” its staff avoided serious harm in the country last year, after it pulled 10 workers out just a day before the violent uprising began.

There’s a limit to how long you can do that job and remain sane. I don’t think I could have done it for much longer

Despite Howells’ bullish projections for some of its developing markets, he says North America is still the firm’s “best market”, with Canada providing the strongest profit margins in the group. “Canada is stronger than the US and it has been for five years,” he says. “It’s ridden the recession well and there’s a lot going on, but it could be that we’re close to maxing out there.”

The UK, on the other hand, is the firm’s “softest market”. Howells criticises the coalition government for its lack of clarity on energy policies, and claims the industry has “lost trust” in the coalition after its decision to slash solar feed-in tariffs. “In principle it was right to peg back [the feed-in tariff], but they shouldn’t have done it in one foul swoop [sic] - we should have pegged it back more slowly over 10 years. There were smarter ways of doing it.”

But Howells backs the government’s mandatory BIM roll-out and believes the collaborative system is a “game changer” for construction. “If you’re not doing BIM in five years’ time, you won’t be in business,” he says. The firm is already starting to see “quite substantial savings” on BIM projects around the world, he adds.

Five years is a long time in business, of course, and nobody knows that better than Howells. He became managing director in 2004 and the next five years was a frenetic period. He says he doesn’t miss his former role. “There’s a limit to how long you can do it and remain sane. I don’t think I could have done it for much longer. When you come into a job like that, you feel you can make a difference, but after about five years you’ve run out of ideas and it’s time to let someone else have a go.”

Of course, Howells’ period as managing director has left a strong legacy - it wasn’t just turnover that doubled, but also staff. “Recruitment became a key activity. We had a dozen recruiters in the business doing nothing else but recruitment.” Mott MacDonald now employs 14,000 people - a far cry from the company of 80 he joined from university. And that sounds like a sizeable rebel force with which to battle it out against the evil Empire … 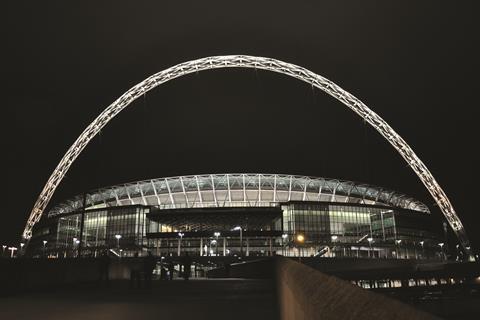 The Wembley Row: ‘The costs of going to court were excessive’

It may be 18 months on from Mott MacDonald’s settlement with Multiplex on the largest ever UK construction law suit - a £235m claim against the engineer for alleged delays on Wembley stadium - but Howells’ is clearly bruised by the experience. He confirms the two firms settled “because the costs of going to court were excessive”, adding that the legal fees were “well in excess” of the eventual settlement.

He says that in hindsight the firm should not have agreed to a restrictive “novation clause” with the client, Wembley National Stadium Ltd, which obliged them to transfer to the job and work with whoever was appointed contractor. He says: “It would have been nice to have a get-out clause.”